Finally, a post! And even though I want to do a nice 2013 retrospective post, I feel that it’s been long enough since I’ve posted an actual review that I should do so. Skipping over many other books, I’ll turn to the book on the Cybils Young Adult Speculative Fiction shortlist that I’ve read and not yet reviewed. 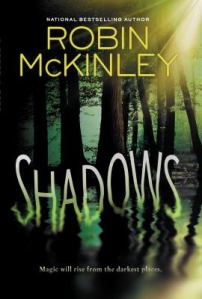 Robin McKinley is one of my very top, all-time favorite authors [link to an old post about her, from when I was still posting on LiveJournal]. I was feeling impatient when I didn’t get this for my birthday, so I borrowed it from the library and read it. I was a little sad, thinking that maybe nobody would since my little brother is no longer around to give them to me. But my love gave it to me for Christmas and I started reading it again right away. I’m not sure I can be totally rational an author whose books I’ve been in love with since I was 8 or 10, but I will try.

Maggie has pulled life together after her father’s death, relying on her mother and brother, her best friends Jill and Takahiro, as well as her dog, Mongo, and her job at the local animal shelter. But now, going into her senior year in high school, things are falling apart. Takahiro hasn’t been quite the same for a while, often too busy with his gizmohead friends to pay attention to her. But worst of all, her mother has married Val. And not only does Val have a complete lack of fashion sense and a dorky Old World accent, he has too many shadows. Lots of shadows. Shadows that move when he doesn’t, and that have too many arms and legs. She can’t stand to be around him, but her mother is in love and Maggie doesn’t have anywhere else to go.

New World and Old World are basically the United States and Europe, but in this world, the most important difference is how they deal with cohesion breaks, or cobeys, when reality just starts to break apart. New World has dealt with it with increasing levels of science: anti-cobey boxes on the corners, programs on pocket phones so anyone who sees something aberrant can send in the coordinates automatically. Also, they’ve tried to genetically erase magic, so that there should be none left in all of New World. Maggie’s never really bought into the whole “you don’t need to know anything about it, just report it and leave it to the experts” mentality, but she’s also deeply uncomfortable with magic. So when things start to go strange around her, she has to re-evaluate the belief system she’s grown up with, including her relationship with her new stepfather.

McKinley uses some popular YA tropes in this book, ones which she hasn’t really used before and which I was quite surprised to see: insta-love, a love triangle, and a prophecy. But not to worry (I was a little at first). McKinley is a pro, turning all of these on their heads. The romance is sweet and genuine, without annoying dithering, and the prophecy is left amorphous and ignored enough that it doesn’t get in the way.

I loved Maggie – and her dog, and her algebra book so much. I love that she has an actual hobby in addition to the shelter job. I approve of crafting hobbies, even if origami is one I’ve never gotten into myself. I like that she’s taught herself Japanese, and mixes in little words in Japanese. There’s interesting adult-teen interplay here: Maggie is stepping into something that the adults have been keeping from her, with very good reason, but I never got the sense either that Maggie and her friends were going to fix everything that the adults hadn’t been able to do right, or that they were just background players to whom the adults would delegate a few tasks.

McKinley has made up her own slang, so while there might be some language that’s foul in that world, there’s nothing that reads as offensive. There’s some kissing and some accidental nudity (not at the same time), and some minor violence. I’d say perfectly safe for teens on up – though many middle grade books have much worse in the way of violence, it has more teen appeal.

I found myself contemplating that McKinley style. Even though Maggie isn’t any of McKinley’s other characters, and this is contemporary setting unlike her high fantasy stories (this last is probably why I’ve been hearing people say fans of Sunshine [link to my first ever blog post, where I did a mini-review] will like it – but it’s much less dark than Sunshine. There’s that way she has where the character is telling her story, a little of now, a little of the past, setting up the world without ever acknowledging that the reader isn’t in the same world. Things are going along interestingly but not necessarily heavy on the action when something small shifts and we’re right in the thick of things and the casual details that were mentioned before turn out to be significant and the character who’s seemed ordinary turns out to have depths and skills and figures out how to use them in time.

It feels like there could be a sequel, but once again, it’s McKinley, so I’m not expecting one. At any rate, it was highly satisfying.

I'm a librarian and book worm who believes that children and adults deserve great books to read.
View all posts by Katy K. →
This entry was posted in Books and tagged Armchair Cybils, contemporary fantasy, Robin McKinley, teen fantasy. Bookmark the permalink.