Lulu and the Duck in the Park 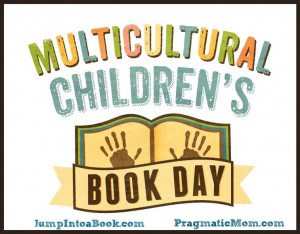 I’ve had this book on my radar since it first came out in the US – both because of my ongoing search for multicultural children’s books, and because I so loved McKay’s middle grade series that starts with Saffy’s Angel. But the chances of my son picking up a realistic fiction book with a bright pink cover were pretty slim, and I don’t so often read early chapter books for my own entertainment. I took this one home recently in the hopes that it might make a good introduction to chapter books for my four-year-old, animal-loving girl. 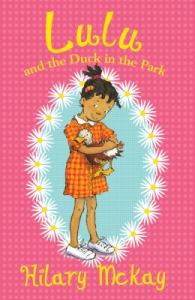 Lulu and the Duck in the Park by Hilary McKay. Illustrated by Priscilla Lamont. First published in the UK by Scholastic Children’s Books, 2011. Published in the US by Albert Whitman & Co., 2012.

Lulu loves animals. Even more than being famous for jumping off swings at the highest point, Lulu is famous for all the animals she keeps at home.

Her teacher, on the other hand, does not like animals at all, and Lulu’s attempt to convert her by having her dog follow her to school backfires spectacularly: Mrs. Holiday threatens to give away the class guinea pig if any more animals are brought to school.

But when Lulu sees her favorite duck-from-the-park’s egg rolling into the path, about to crack, just as the class is walking back to school – she can’t help but scoop it up. And an egg isn’t an animal – right?

My own little girl seems not quite ready for this yet – she fell asleep partway through the first chapter, and seems quite attached to reading picture books at bedtime still. I won’t rush the chapter books, then – and my son was ready to listen to them when stuck driving in the car much sooner than he was ready to sit and listen to books without pictures at home – but I was so charmed with the start of this that I had to finish it for myself.

Wow, is it ever charming! It is short and simple, with lots of pictures, so it’s clearly aimed at the typical second- or third-grade reader. But McKay succeeds admirably at fleshing out Lulu and her best friend Mellie, as well as Mrs. Holiday – much more than I’ve typically seen in early chapter books. Lulu’s clearly led by her love for animals, which leads to some serious but age-appropriate thoughts about animals and when to adopt them.

“Just in case,” said Lulu, worrying, “I should quack to this egg. So it doesn’t get lonely.”

I still found myself laughing out loud at multiple scenes in the book. In this one, near the end, Mrs. Holiday is trying to convince another student, absorbed in pretending to be a vampire, to really work at stopping his nosebleed:

“Anyway, all good things come to an end. Bloodletting is over. This is now math.”

This might actually be an early chapter book series that I would read for myself. But my daughter will be old enough for it soon, and in the meantime, I’ve put the copy we’re currently reading on hold for another little girl who came into the library looking for early chapter books about animals.

8 Responses to Lulu and the Duck in the Park