I enjoyed Rachel Hawkins’ earlier Hex Hall series, and was pleased to see her first middle grade book nominated for the Cybils. 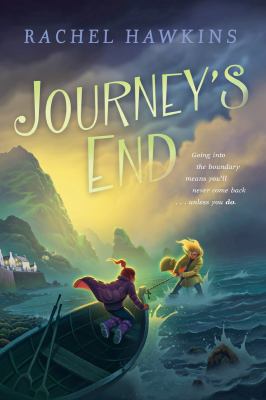 Journey’s End by Rachel Hawkins. G.P. Putnam’s Sons, 2017.
Our story opens in the village of Journey’s End in northern Scotland a hundred years ago, as young Albert Macleish sneaks out of his house early in the morning and rows through the thick, roiling Boundary Fog to the lighthouse on the island off the coast.  He is never seen again.

In the present day, 12-year-old American Nolie, still learning to deal with her parents’ recent divorce, travels to Journey’s End, where her father is a scientist researching the thick gray Boundary Fog that never leaves.  While he firmly believes there’s a scientific cause, Nolie is a fan of ghost stories, particularly the “fun creepy” kind.  She’s come prepared with a book of Scottish ghost stories.

Meanwhile, similarly aged Bel is a native of Journey’s End, whose family owns a tour boat and tourist shop, since tourism is now the major industry here.  She’s been lonely since her best friend abandoned her in favor of a new girl in town, so that she and Nolie are able to make friends fairly quickly.  It’s in the back of Bel’s shop, in a row of photographs of people lost in the fog a century ago, that Nolie recognizes a face she just saw on the beach….

This present-day story alternates with snippets from “The Sad Tale of Cait McInnish”, a young nanny whose noble charge fell out of a tower window centuries earlier.

The whole book is an appealing mix of developing cross-cultural friendships, giving old friendships a second try, mystery, and time travel.  I would say it succeeds at Nolie’s goal of “fun creepy”, with just the right balance of fear, suspense, courage and humor.  Plus, Scotland!

This review reflects my opinion, not that of the Cybils committee.

I'm a librarian and book worm who believes that children and adults deserve great books to read.
View all posts by Katy K. →
This entry was posted in Books, Reviews and tagged ghosts, Scotland, time travel, youth fantasy. Bookmark the permalink.