Macy McMillan and the Rainbow Goddess by Shari Green 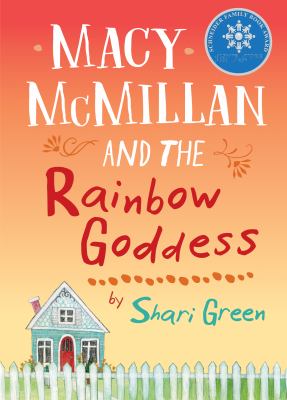 Macy McMillan and the Rainbow Goddess by Shari Green. Pajama Press, 2017
Macy is in sixth grade and struggling.  She’s horrified when her class is assigned a genealogy project, since she doesn’t know her father considers her mother to be her only family.  A stray comment about this from her best friend sets off a fight that lasts for most of the book.  Furthermore, her mother is getting married – Macy would prefer having her to herself, as she has all her life – and they are leaving their house and Macy’s wildflower rainbow of a garden to live in a boring beige house with the new stepfather and his twin daughters.  Perhaps worst of all, Macy’s mother insists that she help elderly Iris Gillan next door pack her books, as she’s packing up to move to assisted living.  Not only does Macy prefer to plan her own time, but Mrs. Gillan doesn’t speak sign – how will they communicate?

With notes, cookies, and shared books, as it happens.  Mrs. Gillan prefers to be called Iris, and explains that she’s named for the goddess of rainbows, not the flower.  I was happy that the books they bonded over included some recent titles, as well as classics like Anne of Green Gables.  (Though I love so many of the classics, when only classics are name-dropped, it makes me think that the authors of children’s books only read them themselves when they fit in that age range.)  I loved Iris’ language of cookies, too, explaining that each different kind she bakes sends a different message, along the lines of “laughter”, or “you can do it.” Conversations with Iris, as brief as they are, help Macy gain perspective on her life.

Even though being Deaf is a major part of Macy’s life, as in You’re Welcome, Universe, she doesn’t see this as a limitation.  The people who are important to Macy all learn to sign, and she (for better or worse) doesn’t really care about the others, with the exception of Iris.  Macy goes to a mainstream school, plays on a soccer team, and has a rich life of reading and hobbies. The book is written engagingly, in quick-to-read blank verse.  I think my daughter would enjoy it, but I couldn’t get her to read it, likely because she’s quite sensitive about type size right now.  In any case, the difficulties with friends and changing families are ones that will resonate with a broad range of kids.  Even though it looks like the author does not have hearing loss herself, I’m really happy that more books about DHH experience are coming out now – I remember El Deafo being the only one, so deeply touching to my daughter that she took it to bed with her like a teddy bear.

This year’s Newbery winner, Hello, Universe by Erin Entrada Kelly, also stars a girl with hearing loss, as well as the Filipino-American boy who’s in the well on the cover.  I listened to it and enjoyed it quite a bit more than Blackbird Fly, but neglected to take notes on it, so I’m afraid I won’t be doing a full review here. But as it won the Newbery, I expect you’ve heard of it already.