Operatic and Diana: Princess of the Amazons

Here are two more graphic novels, one thoughtful Cybils finalist (read in print from the library and on my official Cybils TBR Readdown list) and one sprightly superhero comic read on hoopla, because I found it there and like Shannon and Dean Hale’s work in general. 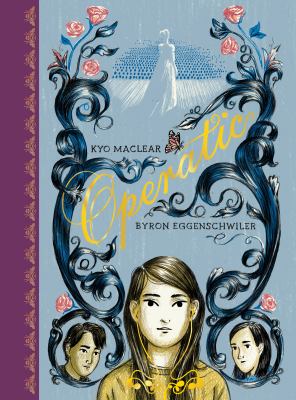 Operatic by Kyo Maclear and Byron Eggenschwiler. Groundwood Books, 2019.
Charlotte Noguchi (aka Charlie) has friends, but never quite felt she fit in middle school.  This dreamy story follows Charlie as she wonders about the sensitive and much-teased boy who’s been missing from school for two weeks, and as the home room teachers plays all sorts of different music for the class as part of an assignment for them to find the music that truly expresses who that person is at that point in time.  Charlie discovers the opera singer Maria Callas, known for her passion rather than her perfection.  There are also explorations of what it might mean to be perceived as gay in middle school and how to be an ally.  It’s all illustrated in what looks to me like colored pencil, with a limited palette that shows what’s going on – the main storyline in gold and black, memories of when Luka was still in school in blue and black, and stories of Maria Callas in red and black.  The color shading work beautifully to convey emotion.  For kid testing, my daughter read it somewhat reluctantly, said she enjoyed it, but hasn’t gone back to it.  But this is very much a character study, and my daughter prefers more plot-driven books.  I thought it was beautiful.

Diana: Princess of the Amazons by Shannon Hale and Dean Hale. Illustrated by Victoria Ying. DC Comics, 2020. ISBN 978-1401291112. Read on Hoopla.
Young Diana lives on an island that’s paradise – baby cheetahs to find, oceans to jump into – but though she has many aunties, there are no other children on the island, and her mother the queen is often too busy to play with her.  Remembering that she herself was made out of clay, Diana makes a girl out of sand to be a playmate.  At first, she and Mona have lots of fun together and Diana is thrilled.  But as time goes on, Mona encourages her to do things that are increasingly disturbing – skipping class, stealing, and more – while at the same time forcing her to confront questions about whether Diana really is wanted and a true Amazon.  With clear line drawings and a soft but strong palette, this is full of appeal for young superhero fans.  It didn’t have quite the depth of Rapunzel’s Revenge, but hopefully if it’s a series, they’ll be able to put more in further volumes.

1 Response to Operatic and Diana: Princess of the Amazons