We are celebrating Children’s Book Week (May 13 to 19, 2013) by providing all of YOU, our loyal followers, with the opportunity to win fabulous children/teen’s books, gift cards, cash, or other prizes by hopping around to the almost 100 participating blogs/authors listed below in the Linky List. What better way to celebrate Children’s Book Week?

Click here to see the other blogs in the giveaway hop.

Contest runs May 13 to 19, 2013
Please leave a comment and tell us about your favorite fantasy forest (from a book, of course!) to enter this giveaway.

This is a middle grade fantasy novel, published this year, equally appealing to boys and girls.

Description: Soon to be twelve-year-old Miranda Moon’s overactive imagination has landed her in trouble again. This time, she’s been suspended from school. Since her Halloween weekend just got extended, her parents decide to take her and her straight-laced younger brother, Marcus, to her late grandparents’ old cabin. That suits Miranda just fine. She’s always felt there was something special about the place. Besides, she has a knack for making the best of things. But when Miranda finds a curious water globe hidden in the cabin, she and Marcus are catapulted into a world even she never imagined. A world where everybody already knows their family name and magic flows through the trees. A world called Wunderwood. But their arrival happens to coincide with the release of a sinister warlock from a forty-year imprisonment. Thornton Crow resumes his deadly agenda to find the source of Wunderwood’s magical power, the Tree of Mindala, and seize it for his own. As Miranda learns of her own connection to Thornton, she realizes that it’s up to her to end his cruel and relentless cycle of death that would steal not just magic, but also hope. With only the cryptic words of a prophecy to guide her, she holds the fate of the entire realm as well as the safety of Marcus and the newly found branches of her family tree in her hands. Miranda’s signature optimism is put to the ultimate test when she chooses to carry out the task that will save Wunderwood… or doom it forever.
(Contest details shown twice to be easier to find.)
Contest runs May 13 to 19, 2013
Please leave a comment and tell us about your favorite fantasy forest (from a book, of course!) to enter this giveaway.

Keep reading for a guest post from author Elle Jacklee! 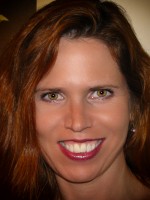 When The Tree of Mindala was first released, a friend and fellow mom said to me, “It’s a little like having another baby, isn’t it?” Of course, nothing can compare to the experience of becoming a mom, but it was hard to deny that, in some ways, she was right…

First the idea for a story is conceived, much like that moment of human conception when not much about the finished product is clear, only that something truly amazing has happened. Then, as time goes on, details become sharper, and things start to take shape. You begin to feel connected to this miracle that grows each day. Before long, it’s a part of you and you’re a part of it.

There are days, in both scenarios, when the euphoria of creation has you walking on air. There are also days when you’re just a tiny bit (okay, maybe more than just a tiny bit!) afraid about what will happen once your newest addition meets the world. Will everybody adore your pride and joy as much as you do? Will the world appreciate the beauty that is your crowning achievement? And will you ever get a full night’s sleep again? But soon you realize there’s no turning back, so there’s really no point in worrying about any of that.

When I was expecting my first child, I daydreamed about what he would look like, which personality traits he would get from me and which from his dad, etc. It wasn’t long after he was born before it was clear that some of my expectations were not entirely “accurate”. Likewise, when I first sketched the characters in my book, I thought I had a pretty good idea of who they were. But as the story unfolded, some of their personalities emerged in ways I hadn’t expected. They had taken on a life of their own. With my children as well as my fictional characters, I’m still amazed at how their personalities continue to evolve. And in both cases, things just seem to go better when I allow them to be just who they are!

Now that they (my children and my book!) are here in the world, I no longer concern myself with those doubts I had while they were on the way. Deep down, I always knew that in the end it would all be worth it, and it has been. I just tell myself, just as I will tell my children, to always be true to yourself and always do your very best. And ultimately, doing one will be the same as doing the other.

As a proud mom, the stories that I will always be most interested in watching unfold will, of course, belong to my children. But I’m excited to share that I’m currently working on the second installment of the Wunderwood series, The Triad of the Tree. I’m really enjoying delving deeper into the characters and I can’t wait to share more of Wunderwood’s history with readers. But between my kids and this new addition on the way, one question still remains: will I ever get a full night’s sleep again? But I guess it doesn’t really matter… there’s no turning back now!

I'm a librarian and book worm who believes that children and adults deserve great books to read.
View all posts by Katy K. →
This entry was posted in Blog, Books and tagged giveaways, guest post, youth fantasy. Bookmark the permalink.

33 Responses to Kid Lit Giveaway Hop – The Tree of Mindala