Today is the 22nd KidLit Blog Hop! That reminds me that the kerfuffle last week put me behind on my hopping, but I’m going to try again this time. There’s a lot of fun books linked up already!

We keep a large basket full of our current library picture books in our living room. These are the ones that we loved from the last month or so.

King Arthur’s Very Great Grandson by Kenneth Kraegel.
On his sixth birthday Henry Alfred Grummorson, a distant descendant of King Arthur, rides forth in search of battle and glory on his donkey, Knuckles. But each creature he meets offers him a non-violent competition: the dragon blows smoke rings, the Cyclops begins a staring competition, the Griffin plays chess, and so on. At the end of his journey, Henry still hasn’t used his sword – but he does have some new friends. Wavery ink and watercolor art gives this book an old-fashioned charm. My son would have obsessed over it during his four-year-old knight phase.

Monstore by Tara Lazar. Illustrated by James Burks.
“At the back of Frankensweet’s Candy Shoppe, under the last box of sour gum balls, there’s a trapdoor. Knock five times fast, hand over a bag of squirmy worms, and you can crawl inside…. THE MONSTORE.” Zack has a problem: his little sister Gracie is always getting into his room. The Monstore monsters are supposed to do whatever you tell them to, but his monsters don’t keep Gracie out. Now he has a new problem: his whole house is full of monsters. He tries to take them back, but “No returns. No exchanges. No exceptions.” This has bright art that looks like it could be from a digitally animated movie, with cute monsters hiding on every page. It took a couple tries for my three-year-old to get into it, but once she did, she cried when it was time to take it back.

Princess in Training by Tammi Sauer. Pictures by Joe Berger.
Viola Louise Hassenfeffer wants her kingdom to be proud of her – but karate chops, diving in the moat and skateboarding don’t work. Will Camp Princess help? This delightful story (still sparkly on the cover) features a multicultural princess class a tomboy princess who (spoiler!) defeats the dragon on her own. The layout varies between more traditional picture-book style and large comic book-style panels with written-in sound effects.

Unicorn Thinks He’s Pretty Great by Bob Shea.
Goat thought he was pretty cool, until Unicorn came to town and started doing everything better. Goat tries a typical kid-style magic trick; Unicorn is really magic. Goat bakes a treat that almost comes out right; Unicorn can make it rain smiling rainbow cupcakes. Goat is sure they’ll be enemies… until it turns out that Unicorn envies Goat, too. It’s told in child-like drawings that capture the spirit perfectly.

Belinda the Ballerina by Amy Young.
This is an older one (2002) that’s just right for my little girl now. Belinda loves to dance and is very graceful but…. “Belinda had a big problem – two big problems: her left foot and her right foot.” No one will even let her audition because her feet are so big. This is a silly story about following your heart no matter what. 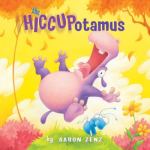 The Hiccupotamus by Aaron Zenz
A story told in extra-silly bouncy rhyme about a hippopotamus that can’t stop his hiccups. It features a full cast of brightly colored, round animals, whose bios at the end I enjoyed as much as the story.

Finally, one I reviewed a couple of years ago that my daughter wanted daily for about five weeks this time: Cinnamon Baby by Nicola Winstanley.