Sorry for the silence, folks! It’s been a rough fall for viruses at our house, and I was running a game day at the library over the weekend as well. (Not going to Kid Lit Con… but hopefully some year!) 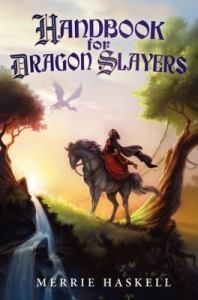 Handbook for Dragon Slayers by Merrie Haskell.
I really liked Haskell’s first book, The Princess Curse, so naturally I wanted to read this one as well. It’s also been nominated for a Cybils in Middle Grade Speculative Fiction.

Princess Tilda is the heir to a tiny principality on the Rhine. Her mother rules since her father failed to come back from the Crusades, and tries to train Tilda in her duties as well. But Tilda would much rather be a nun and have the time to devote all day to becoming a scribe. One day she hopes even to write her own book, instead of just copying old ones. She has a lame foot, and is very sensitive to the people in her kingdom who take this as a sign of demonic affliction.

Tilda and her maid, Judith, are visiting a neighboring castle (where Tilda’s crush Parz just happens to be squired.) Then Tilda is kidnapped by her cousin Ivo, who already has her mother captive and plans to take over their kingdom. Though Parz and Judith rescue her the same night, Tilda, in a somewhat hard-to-accept way, is inclined to just give up her kingdom. After all, Ivo isn’t deformed – maybe she can just join a convent and have the life she always wanted.

Before breaking that news to her companions, though, they decide to do a little dragon hunting. This will help Parz gain some points with his knight, as well as giving Tilda a topic for her very own book. Naturally, hunting dragons with a small and untrained party of three turns out to be more dangerous than they’d realized. Dragons turn out to be not what they’d thought. And Tilda has soon gained the attention both of the Wild Hunt and of the wicked Sir Egin, a Bluebeard-type knight beside whom Cousin Ivo seems endearing.

It will take a good deal of persuasion from loyal Judith, Parzival, as well as a dragon who ends up helping her for Tilda to work up the gumption to try to reclaim her kingdom and decide not to let her lame foot define her. It’s a story of resilience, transformation and love, in a beautifully detailed medieval German setting.

There are still some weaknesses to the book, however. Tilda is somewhat frustrating in her willingness to let other people push her around in the first part of the book, and it takes a bit for the plot to heat up. There is not as much dragon hunting as readers might hope for from the title. And Judith – Judith I never felt I knew as well as I felt I should, considering the book has only three main characters. But I can’t decide if this is a weakness in the book, or if Haskell is making a deliberate point here: while Tilda doesn’t like that people don’t see past her foot, she also doesn’t see past Judith’s station in life. Tilda may tell Judith everything about her own life, but she doesn’t try to learn as much about Judith.

These things aside, I very much enjoyed this book. I’d recommend it for readers of about 10 and up, looking for a fantasy story focusing more on character and setting than on action.

I'm a librarian and book worm who believes that children and adults deserve great books to read.
View all posts by Katy K. →
This entry was posted in Books and tagged Armchair Cybils, dragons, historical fantasy, Merrie Haskell, youth fantasy. Bookmark the permalink.

1 Response to Handbook for Dragon Slayers