Happy almost-Solstice, friends! As promised, my review of fellow blogger Cheryl Mahoney’s book. Be sure to catch my interview with her if you missed it last week, and enter the giveaway, which will be open until December 26. (But enter now! My blogging time will be increasingly limited with the holidays.) 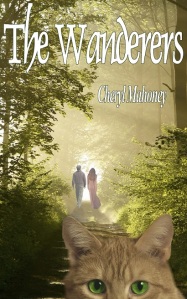 The Wanderers by Cheryl Mahoney. Independently published, 2013.
Jasper is an independent adventurer who lives by the rules he’s made for himself, things like not traveling with companions and avoiding magicians. But the rules that have served him well so far are put to the test as the story gets underway.

First, there’s Tom, the magician’s talking cat, which helps Jasper defeat the magician but insists on coming with Jasper afterward. (I seem to be one of the few readers who don’t find the idea of talking cats enticing, but I found myself liking him anyway.) But then a witch’s daughter, Julie, desperate to escape her scheming mother, asks for a guide to the next town. Once there, it’s clear that the town isn’t big enough to hide her from both her mother and Marjoram, her well-meaning but misguided fairy godmother.

One town turns into another, and it turns out that Julie is pretty handy at rescuing people and defeating evil villains herself. But she needs a plan besides tagging along. (Tom, it turns out, is happy with fish and the hope of someday rescuing a beautiful Siamese.) And though both characters have been resisting marriages that others want to foist on them for a long time, each finds the other person growing on them…

As they journey, the characters they meet are drawn loosely from traditional tales – ogres, a Sea Queen who demands a tribute of young men. Jasper’s experiences and Julie’s time in her father’s library lead to discussions especially fun for fairy tale fans, though there’s plenty of other humor as well.

Both of our main human characters have enough of a back story to keep them from feeling as interchangeable as the maidens and princes they meet along the way, and both put effort intofiguring out who they are apart from others’ expectations. I found myself eagerly looking forward to reading it every day.

The book is being marketed as YA, but I’d say it’s good for a much broader age range. There’s no objectionable content, though the romance and mentions of dastardly male behavior towards women might not feel relevant for younger middle grade readers. I’d recommend this wholeheartedly for fairy tale lovers aged 10 and up.

I'm a librarian and book worm who believes that children and adults deserve great books to read.
View all posts by Katy K. →
This entry was posted in Books and tagged fairy tales, teen fantasy, youth fantasy. Bookmark the permalink.

7 Responses to The Wanderers