And back to reviewing for the Armchair Cybils, as well as following up with my own series reading, with this much-anticipated book. 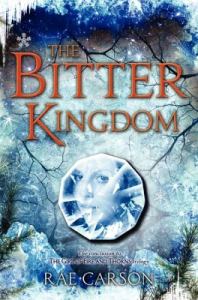 The Bitter Kingdom. Girl of Fire and Thorns Book 3. by Rae Carson. Greenwillow Books, 2013.
At the end of the last book, Crown of Embers, Elisa watched her beloved Hector, captain of her guard, taken hostage by the enemy Inviernes. Now, she sets off with a very small party of unlikely supporters to rescue him: former traitor Belén, Mara, the Invierne underground leader Storm, and a young mixed-race slave girl called Mule.

The journey there is hazardous. Once she gets there, she must get as far as negotiating without her own Godstone betraying her presence. And if she can find and rescue Hector still alive, they must still get back to their own kingdom and wrest it back from the traitors there. All the while, as always, Elisa wonders what her special mission in life is, the one for which she was given the Godstone.

There is so much going on in this book, from various harsh environments, the relationships in the little travel party, Elisa’s still budding romance with Hector, and her coming to terms with her role as queen. Did I say role? Maybe “power” would be a better word, as Elisa reaches for more, out of a desperate need to stabilize the region. And while things aren’t easy by any means, it’s nice to see things working out a little better for Elisa after all the trauma of the previous books.

Notes for gatekeepers: as with the series in general, people die violent deaths in this book, and there is also some sex, described in moderate detail.

I really enjoyed this series as a whole, and I appreciate that Elisa is allowed to fall in love and still be both extra-curvy and in charge. This book felt a little bit choppy, with different missions in different parts of the book, and retrospectively, might go a tiny bit overboard with the Empowering Elisa message. I still believed in Elisa, though, and would recommend this series wholeheartedly to anyone looking for a good coming-of-age political fantasy series on the very specific side, and people looking for powerful stories with strong characters in an interesting setting and compelling action in general.

I'm a librarian and book worm who believes that children and adults deserve great books to read.
View all posts by Katy K. →
This entry was posted in Books and tagged Armchair Cybils, epic fantasy, multiculturalism, teen fantasy. Bookmark the permalink.