When I went to PLA in March, one of the sessions I went to was on the most popular kinds of nonfiction books for adults, the Top Five of the Nonfiction 5. Unsurprisingly, self-help is a perennial favorite category (if not one recognized by Dewey), and one of the trending hot themes right now is the power of habit. It just so happened that I’d already put this one (still on order at the time) on hold for myself. 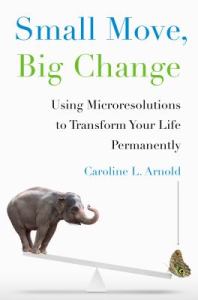 Small Move, Big Change by Caroline L. Arnold. Penguin, 2014.
Most people, Arnold contends, make a few of the standard five resolutions every rear. Every New Year’s they make them, and then, with feelings of deep guilt, realize a few months later that they’ve fallen off the wagon. The problem is that the resolutions – get in shape, lose weight, get organized – are too broad, with no real starting point. Instead, Arnold proposes a series of microresolutions. Pledge to take the stairs, or to let the cookies offered in the meetings go by, or to take care of the mail right away every day. Once this small change is so automatic you don’t have to think about it anymore – usually after a couple of months – you can move on to a new microresolution. Inching your way closer to your goals is ultimately faster and more successful than aiming for sweeping change!!!

Each of the chapters is filled with lots of upbeat stories of real people and how their problems were solved with microresolutions, which I found interesting, but they are also set up to make it easy to skim for the nuts and bolts if that’s what you want. The book starts off with chapters devoted to the parts of successful microresolutions, and then moves on to the most common problem areas, starting with sleep. I’m still looking for that magic bullet of a microresolution that will let me consistently get to bed on time, but overall, I found Arnold’s arguments powerful and convincing.

I'm a librarian and book worm who believes that children and adults deserve great books to read.
View all posts by Katy K. →
This entry was posted in Books and tagged Adult Nonfiction, habit, self-help. Bookmark the permalink.