Way back in November, I wrote a list of my top ten fantasy books for middle grade boys starring girls. It’s taken me a while to put this companion list together – but here are a dozen favorite fantasy and science fiction books for teen boys with girls in the lead. Because sometimes we need reminding that a good story is a good story no matter the gender of the protagonist. As my son is too young for most of these yet, I’ve tested them instead on my younger brother (when he was still a teen), as well as on my love. I’d love to hear your favorites, as well!!

The Coldest Girl in Coldtown by Holly Black – A girl wakes up the morning after a party only to find that the rest of her high school classmate have been slaughtered by vampires in a book where the romance and the ickiness of vampires meet head on. I read this in print, while my love enjoyed the audiobook. 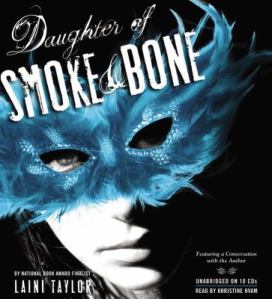 Daughter of Smoke and Bone by Laini Taylor – 17-year-old Karou finds herself in the middle of a battle between angels and demons, where the lines of good and evil are nowhere near as clearly drawn as you might think. The first book in the series has more of a romantic angle, while the second (I’ve heard) is even more a war story.

Girl of Fire and Thorns by Rae Carson – Overweight and insecure Princess Elisa is sent to marry a king – who soon dies, leaving her not officially queen of a strange country. There’s survival in both desert and jungle and a whole lot of political intrigue in this impressive series.

Graceling by Kristin Cashore – In a world where having eyes of two different colors means that you have some sort of superpower, Katsa is Graced with the ability to kill. She’s been used by her uncle as an assassin since childhood, but now tries to strike out against him. This one both my love and I read, and gave to his brother.

The Hero and the Crown by Robin McKinley – Okay, our heroine Aerin is a princess, but one who avoids balls with a passion in favor of dragon hunting, eventually tangling with characters from her country’s mythic past. I’ve read this aloud to both my brother and my love.

Howl’s Moving Castle by Diana Wynne Jones – Sophie, oldest of three siblings, is convinced she’ll never amount to much. Then she gets turned into an old lady and falls in with the aggravating Wizard Howl and his moving castle.

Huntress by Malinda Lo – Two young women accompany the prince on a perilous journey through dying lands troubled by monsters on the way to meet the Queen of the Xi, who may or may not be disposed to be friendly. 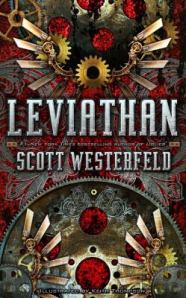 Leviathan by Scott Westerfeld – A young woman disguises herself as a man in order to join the British Air Services, while young Prince Alek in Austrio-Hungary learns that his parents have just been assassinated. This is a riveting steampunk World War I alternate history – and though we keep it in teen here, my son is addicted to this series.

The Naming by Alison Croggon – 16-year-old Maeryd escapes from slavery and learns to use the magic of the Bards in this fantasy with powerful echoes of Tolkien by Australian poet Croggon.

Peaceweaver by Rebecca Barnhouse – A story set around the legend of Beowulf, as Hild deals with dragons and murderers on the way to her mission as Peaceweaver, tasked with making peace between two warring tribes. This is half of a duology; the hero of The Coming of the Dragon is male.

Sabriel by Garth Nix – Necromancy! And bonus – the audiobook is read by Tim Curry! And a new book in the series coming out this fall! We’ve successfully marketed this series to Picky Teen Readers of our acquaintance.

Starcrossed by Elizabeth Bunce – A puzzle mystery with lives at stake, mostly set in a snowbound castle and starring an undercover thief.

I'm a librarian and book worm who believes that children and adults deserve great books to read.
View all posts by Katy K. →
This entry was posted in Books and tagged bibliography, books for boys, steampunk, teen fantasy, teen science fiction. Bookmark the permalink.