Here’s a spooky read perfect for Halloween, written by the author of Peter Nimble and His Fantastic Eyes. Also, check out Jennifer Wharton’s Read Scary post, with lists and links to scary books for toddlers to teens at the Jean Little Library. 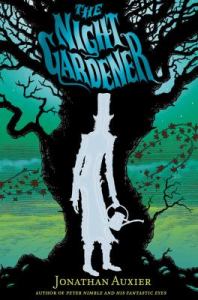 The Night Gardener by Jonathan Auxier. Amulet Books, 2014.
Irish siblings Molly, aged 14 and Kip, 10, are stranded in England of an undefined pre-automobile era, looking for jobs and a place to live. But prejudice against the Irish means that their only choice is the creepy old manor house on the edge of town where no one else wants to go. The house is surrounded by the sourwoods, though no one will tell the children exactly why the sourwoods are so dreadful. On the way there, they meet a wandering storyteller, Hester Kettle. Hester recognizes in Molly a fellow storyteller, and Molly promises to come back and tell her stories of the house.

The house and the family are undeniably odd – but nothing that seems to warrant the sense of unease both children feel. There is a big black tree growing right up against the house, with roots and branches poking through. All of the family members are pale and sickly looking with lank, dark hair. The youngest child, Penny, is happy to see Molly and Kip, but her mother only reluctantly agrees to let Molly and Kip stay, insisting that she can manage without servants. The house is in shambles and no woman of her station should even be attempting to run a house on her own. Something is clearly wrong, but our heroes are too desperate to leave, even when Constance refuses to let Kip sleep in the house because of his bad leg. Other family members include a bullying older son, Alistair, and the weak-willed, gambling man of the house, Bertrand.

Then night comes. In the night, Molly can hear the sounds of each of the family members crying out in their sleep from the other rooms. And in the morning there are large, crooked muddy footprints on the carpet, even though the doors were all bolted shut. Kip claims to have seen a tall, pale man in dark clothes and carrying a watering can from his sleeping place in the barn loft. Molly discovers a locked room, into which all the family members sneak, each keeping the secret from all the others. Though things are quickly getting less all right, Molly is reluctant to go back to Hester Kettle. She has a secret she’s keeping from Kip, and the secrets of the house might help her. But the secrets come at a price, and Molly and Kip will have to figure things out quickly, before they too are trapped.

This is a dark, atmospheric story. I keep coming back to the word “creepy”. There are some threats of actual violence towards the end, but it’s mostly the horror comes from not knowing exactly what is wrong rather than lots of gore or ectoplasm. Though there is dark magic involved, the worst horror turns out to be what we are willing to do ourselves to get what we want, and the ways wishes can twist and turn against us if we’re not careful. Molly is also forced to confront the fine line between a helpful story and a hurtful lie, and her relationship with her brother grows quite nicely over the course of the book. I’m adding this to my mental list of books starring kids who work for a living, also including last year’s Rose. With a cast of well-rounded characters, an exciting plot, and some worthwhile things to think about after the story is over, this is a perfect book for children and like-minded adults looking for something scary to read.

I'm a librarian and book worm who believes that children and adults deserve great books to read.
View all posts by Katy K. →
This entry was posted in Books and tagged England, historical fantasy, youth fantasy, youth horror. Bookmark the permalink.