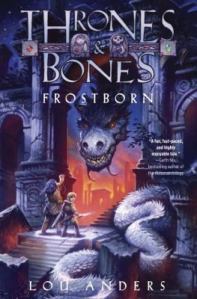 Frostborn. Thrones and Bones Book 1. by Lou Anders. Random House, 2014.
In a Norse-inspired fantasy world, teenage Karn is supposed to be learning how to be the ruler, or hauld, of his village. But instead of learning how to be good at bartering, he spends all his time bettering his skills at the board game Thrones and Bones (rules included; loosely based on the Viking Game or Tafl). He’s so focused on his game that he doesn’t notice that his Uncle Ori’s friendliness is really just trying to get Karn out of the way so that Ori can be hauld instead. Though several of his schemes fail, Ori finally succeeds in tricking Karn into waking the ancient king Helltoppr and his undead warriors.

Meanwhile, young Thianna is a half Frost Giant. She never knew her human mother, and though between human and giant in size, has spent her time trying to be more giant-like than the giants, a fierce and rugged warrior. But when wyvern-riding warrior women come after her, she can’t hide with the giants.

Both on the run from terrible enemies, Karn and Thianna meet each other. It takes some serious readjusting of thinking for both of them, but eventually they realize that teaming up could be helpful. Together, they might just be able to defeat all of their enemies.

This is a fantasy adventure great for those who love games and historical fantasy. Karn and Thianna have to use cunning as well as Thianna’s battle skills to defeat their enemies, and both of them must confront their various prejudices – serious themes underlying battles against treachery, zombies, wyverns, and an ancient dragon. I have several young readers I’d be happy to give this one to, and I’m looking forward to the next book in the series.

I'm a librarian and book worm who believes that children and adults deserve great books to read.
View all posts by Katy K. →
This entry was posted in Books and tagged dragons, historical fantasy, youth fantasy, zombies. Bookmark the permalink.