This one was kindly donated to me by the publisher for the Cybils, and will be going to my kids’ school library shortly. 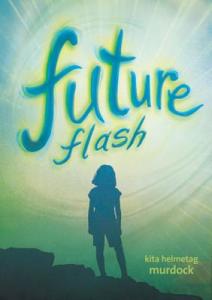 Future Flash by Kita Helmetag Murdock. Sky Pony Press, 2014.
Once in a while – usually after she touches someone for the first time – seventh-grade Laney gets a flash of a picture from their future. Sometimes it’s good, sometimes it’s bad – but she’s known since she was little that she can’t tell anyone about it. Now, for the first time ever, there’s a new boy in her small town class. Unfortunately, she’s partnered with him in dance class. Even worse, when they touch, she gets a vision of a fire so horrific that she starts screaming, therefore ruining his chances of ever fitting in. The horrendous embarrassment gets even worse when she’s caught in class drawing a picture of her vision, featuring Lyle on fire. But Laney tries to help Lyle anyway, trying to protect him from the class bully, Axel, and remembering herself how Axel turned from her best friend into a bully. Events race quickly towards the fire that Laney has foreseen – but will knowing what’s coming help?

The bullying was dealt with realistically – so often, books send the message that if kids just fight back or just let it go, the bullying will go away, when neither of those approaches are statistically helpful. Laney’s visions, while clearly supernatural, are the only such element in a taut tale of everyday elements. While it might not be as appealing to people who want their supernaturally talented youngsters to be off saving the world, kids looking for realistic fiction with a twist should really enjoy it. I really appreciated how Murdock was able to keep a thriller pace and excitement going with such a small canvas: few characters, a small town, and a short time period. As it’s short and exciting, it would work especially well for reluctant readers.

I'm a librarian and book worm who believes that children and adults deserve great books to read.
View all posts by Katy K. →
This entry was posted in Books and tagged bullying, paranormal fiction, youth fantasy. Bookmark the permalink.