Before I get back to business as usual, I’ll note that one of my favorite authors, Stephanie Burgis, is joining a whole bunch of other UK authors in holding auctions to raise money for Nepal.  There are signed books, chances to have a character named after, and offers of writing critique.  Find them at Authors for Nepal 2015.

My son’s 4/5 class has to pick out a science fiction book to read by Monday.  Science fiction in this case can include steampunk but not superhero, and must be in prose, not graphic format, so that Zita the Space Girl, Astronaut Academy and Cleopatra in Space are sadly not allowed, though I would still recommend them to any sci-fi fans in that age range!  I couldn’t resist putting together a list of books I’d suggest to the kids if I had a chance.  I’m including only books published in the last ten years, as there are plenty of lists of older sci-fi books out there already.  Page counts included for kids who find reading longer books in three weeks challenging. 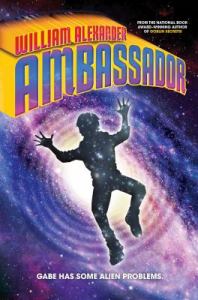 Ambassador by William Alexander. 222 p. Imagine you’re a kid with the responsibility to stop aliens from invading Earth.  Oh, and try to keep your parents from getting deported at the same time.  This short, fast-paced novel was one of my favorites from last year’s Cybils reading. 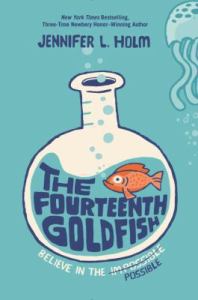 The Fourteenth Goldfish by Jennifer L. Holm. 195 p. When an awkward and oddly crotchety teenager shows up at Ellie’s house, it only takes her a little while to realize that her grandfather, a scientist, has figured out how to reverse his aging.  But maybe he took it a little too far. 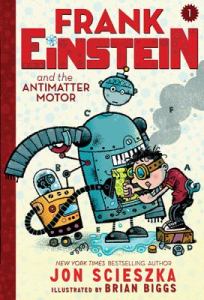 Frank Einstein and the Antimatter Motor by Jon Scieszka. 179 p. This is the only one I haven’t read yet, but it’s Jon Scieszka telling a story of a boy genius and his robot, so it’s got to be good. (This reminded me to put my name on the library list, so I will read it soon.)

Hunt for the Hydra. Jupiter Pirates Book 1. by Jason Fry. 241 p. Pirates! In space!  This one did make it to the Cybils finalists this year, and is the one my son is reading. 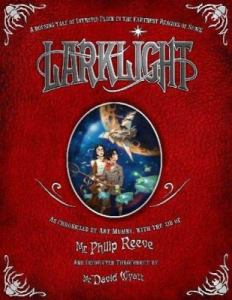 Larklight by Phillip Reeve. 399 p. A charming steampunk story of a boy and his sister growing up in an old mansion on the backwater side of the moon, and what happens when their remote home is invaded. Though on the long side, it’s a physically small book with pictures. 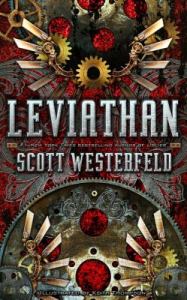 Leviathan by Scott Westerfeld. 440 p. Epic steampunk.  It’s alternate WWI, pitting the heavy machine-using German “Clankers” against the British “Darwinists”, whose weapons of war are all genetically mutated living beings, as well as a personal story of a runaway Austrian prince and British girl who pretends to be a boy to join the British Air Service.  My love and I both enjoyed this trilogy, but my son keeps the audiobook looping in his room. 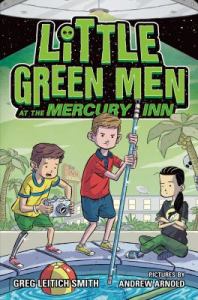 Little Green Men at the Mercury Inn by Greg Leitich Smith. 214 p. Aliens in Florida, a government cover-up, and lots of silliness.  The setting is close enough to real life to be comfortable for new sci-fi readers. 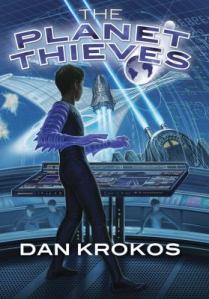 The Planet Thieves by Dan Krokos. 253 p. Or maybe you want adrenaline-filled military sci-fi, with Earth in danger and all the adults out of the picture?  Warning: people will die. 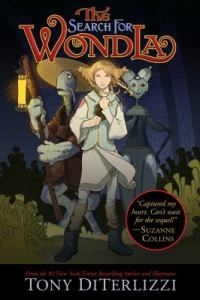 The Search for WondLa by Tony DiTerlizzi. 486 p. Eva Nine has been raised by a robot Mother in an underground sanctuary, doing simulator training before she’s allowed on the surface.  But when she’s forced out, she finds that everything is different, and her OmniPod can’t help her.  It’s illustrated, very helpful in picturing the strange wildlife Eva Nine finds on the surface. 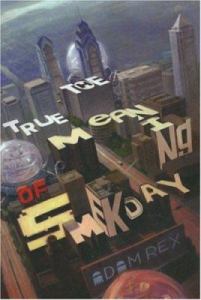 The True Meaning of Smekday by Adam Rex. 423 p. When Gratuity “Tip” Tucci’s mother is kidnapped by the alien Boov, she sets out to rescue her.  Then her car breaks down and only a Boov can help her. And then even worse aliens attack.  We liked the movie “Home”, based on the book, too, but the book has a lot more depth.  There are “photos” as well as some of Tip’s own drawings and some short comic sequences. 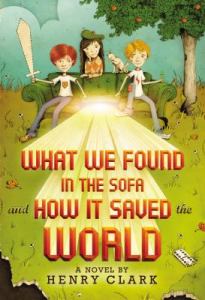 What We Found in the Sofa and How It Saved the World by Henry Clark. 355 p. OK, the school librarian is reading this to the kids now, so they couldn’t use it – but for anyone else looking for off-beat, crazy excitement with lots of mystery and a surprising amount of depth, this would be a great choice.

I'm a librarian and book worm who believes that children and adults deserve great books to read.
View all posts by Katy K. →
This entry was posted in Books and tagged bibliography, diversity, youth science fiction. Bookmark the permalink.