I first heard about this book from Naz at Read Diverse Books, but it finally made its way to the top of the list when it was declared a Cybils Finalist in the Young Adult Speculative Fiction category. 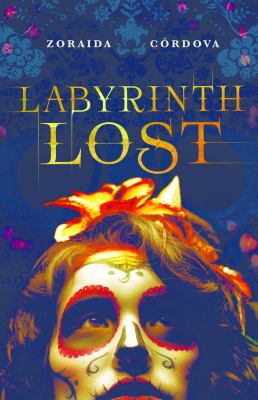 Labyrinth Lost by Zoraida Cordova. Sourcebooks Fire, 2016.
Alejandra – who usually goes by Alex – has been fighting her magic ever since her aunt Rosaria died and her father disappeared, both, she’s sure, connected to their magic use.  Her older sister has happily embraced her healing powers, and her younger sister her visions of the future – but Alex remained unconvinced it’s worth it. When her magic finally becomes so powerful that she can’t stop it anymore, her family is thrilled and plans a big Death Day celebration to dedicate her powers to the Deos.  Alex hopes both to give her powers back to the Deos instead – with suggestions from a handsome and mysterious brujo boy she meets at the magic shop – and to sneak away from the party early with her best friend, Rishi, whom she hasn’t told about her family’s magic.

But things do not go as planned.  Alex’s whole extended family is sucked into the dangerous magical in-between world of Los Lagos, there to meet a certain black fate. Alex convinces the better-trained Nova to help her journey to Los Lagos to rescue her family.  Los Lagos has its own complicated set of rules that Alex isn’t prepared to navigate on her own, even if she doesn’t really trust Nova.  It looks like she is a target herself, and more than just her family’s life is at stake.  She’ll have to work with the many strange denizens of Los Lagos as well as coming to terms with her own powers to complete her mission.

There was a lot that I liked about this book.  The tightly woven extended Latinix family is beautifully painted. The bruja/o religious system is a mix of new but familiarly sketched gods or Deos, with magic based on blood, sacrifice, and the powers of the ancestors drawn from Latin American and Caribbean roots, and involving blow-back similar to that in Holly Black’s Curse Workers books.  The multi-layered world view works well here, though it felt much more a classic quest the whimsical journey of exploration the Alice in Wonderland blurb on the cover gives it.

Unfortunately, I never quite connected with Alex herself, for reasons that I’m having a hard time putting my finger on in retrospect.  Maybe it her reluctance to learn to control her magic, or the way she asked so much from and gave so little to everyone around her?  I certainly felt she could have given Nova a little more credit, given that he was put in a very unenviable position. There is also a love triangle, which I’ve never been thrilled about. I was excited to see that it was (spoiler!) choosing between a boy and a girl, not between two boys as usual.  But though it was presented as a triangle, I really only felt that there were Sparks between Alex and Nova, so the romance aspect didn’t work for me.

I am very glad to see more fantasy books featuring diverse characters and drawing on more than just the typical European mythology, and I am also always happy to see books that show traditional witchcraft in a positive light.  Labyrinth Lost has a lot going for it, but it’s not going to replace Daniel Jose Older’s Shadowshaper as my favorite “brown girl in Brooklyn” fantasy.