The White Road of the Moon by Rachel Neumeier

This was one of my highly anticipated books for this spring.  I was so excited when Rachel Neumeier contacted me and offered to send me a copy!

A girl looked down on for multiple reasons, especially her dark skin and black eyes, may just prove to be the one person needed to save the world. 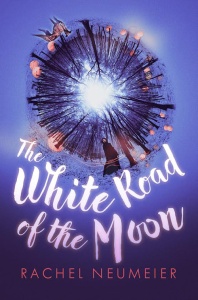 The White Road of the Moon by Rachel Neumeier. Alfred A. Knopf, 2017.
Meridy is orphaned and has grown up despised by the aunt and cousins who took her in after he mother’s death.  Her dark skin lets everyone know that the father she never knew was a distrusted Southerner. Her black eyes tell everyone that she is a witch, supposedly able to pull souls out of living bodies and bind the spirits of the newly dead to her service, before they can take the White Road of the Moon all the way to the realm of the God.  She doesn’t know how to do any of this.  She just likes to run away to a nearby town where she is the only living soul and chat with the ghosts there.

Things change the day she meets a still living (if barely) man and the ghosts of a boy and a dog, whom she names Iëhiy.  From there, she’s learning more of her own powers – she, too, can pull things from the ethereal into the real. She makes her very first living friend with Jaift, the daughter of a merchant whose caravan takes her, just as events ratchet up once again and Meridy and Jaift are battling multiple sorcerers taking over the bodies of the living for their own Nefarious Purposes and trying to figure out what the heck Ghost Boy wants them to do and who he might be.  Not to mention the ghost captain, the ghost princess, a very young prince, and a fire horse.

This is a beautifully developed fantasy world, perfect for those who like the scope and poetry of the Lord of the Rings – there is poetry included here, which Meridy tries to translate for Jaift from the classical into the modern language.  But for those looking for a girl working hard to come in to her own, a story of strong female friendship, of ghosts both malign and malignant, and a fantasy world that, like ours, struggles with racism and the echoes of unhappy events from the past into the present. This is also a good choice for readers who prefer their stories without romance.  The biggest weakness, I think, is the cover, which doesn’t to me convey much at all about the story.  I was also very sad at the end.  I will happily read more stories set in this world, but right now this works as a fantasy stand-alone, in itself a beautiful thing.

I'm a librarian and book worm who believes that children and adults deserve great books to read.
View all posts by Katy K. →
This entry was posted in Books, Reviews and tagged diversity, ghosts, teen fantasy. Bookmark the permalink.