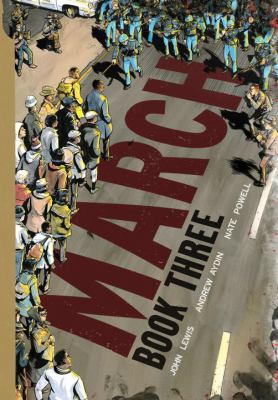 March Book Three by John Lewis, Andrew Aydin, and Nate Powell. Top Shelf, 2016.
This is the third and final book in Congressman John Lewis’s graphic memoir about his time in the Civil Rights Movement, following March Book One and March Book Two.  Though the whole series is framed by Senator Lewis preparing for President Obama’s inauguration, this book opens wrenchingly with the bombing of the 16th St Baptist Church in 1963 and the wave of violence the surrounded it.  So much violence.  It’s a good thing the art is in black and white or it would be unbearable.  Despite all of this, the SNCC, the Student Nonviolent Coordinating Committee works on to secure African-Americans the right to vote, even as it deals with both inner conflicts and differences of opinion between it and the NAACP.  The story culminates with the march from Selma to Montgomery,

As with the earlier books, Lewis is working right with the greats of all the organizations, including Dr. Martin Luther King Jr. and a chance meeting in Africa with Malcolm X.  It also includes portraits of people I hadn’t heard of before.  I fell in love with Fannie Lou Hamer, who was fired from her job when she tried to register to vote and went to work full-time for voting rights instead.  Her pictured conversation with a senator who considered himself a strong supporter but whom she considered weak is priceless.

The illustrations look to me like ink with gray scale watercolor fill – though I am not an artist and could be wrong on that.  True confession time: my eyes will often glaze over in mostly-male movies because everyone starts to look alike to me.  Here, besides capturing the times and the expressions, Nate Powell does a really good job drawing the mostly male characters so that they don’t all blur together.  So very important and helpful in a book like this!

I read the first two books during the Obama presidency, and it was both shocking and heartbreaking how different it felt reading the frame of his inauguration now that the administration is so different.  Then, it seemed like the Civil Rights Movement was a struggle, but one that made great progress, that even if we haven’t quite made it to equality, we were on the way.  Now it feels more like we need to learn from the past not just to remember but to remember how to fight that fight.  And those of us in the majority need to remember (paraphrasing from a training in the book) that we’re fighting not just to help the oppressed, but because none of us are free as long as any citizen is prevented from voting or from having their vote fully counted.

This book won All the Awards this year, and deservedly so.  Really everyone over the age of about twelve needs to read this series.