Code Name Verity is still on my list of books that I should read, but have been too chicken.  Instead, I’ve been reading Elizabeth Wein’s other books, including Black Dove, White Raven and all of her Arthurian books, which I believe I first heard about from Maureen at By Singing Light.  Two notes: first, although these books all happen in sequence, the first three are considered part of her Arthurian sequence, while the last two are officially the Mark of Solomon series.  They all feel mostly like one series to me, with the first one quite a bit earlier than the other four. Second, I read the series over the course of two years without taking notes on it, and the plot builds and ratchets up over the course of the books, so these will be brief impressions of the books.  I’ve included both original and the new covers, as I’m torn between joy at the rare fantasy books with a young man of color on the front, and the elegant simplicity and series feel of the new ones.

(While writing this review, too, I came across this article from the Guardian about the tableware imported from Spain and Turkey that was recently found in Tintagel Castle – proof that the wide-ranging political relationships of Arthurian Britain found in this series were really possible.  ) 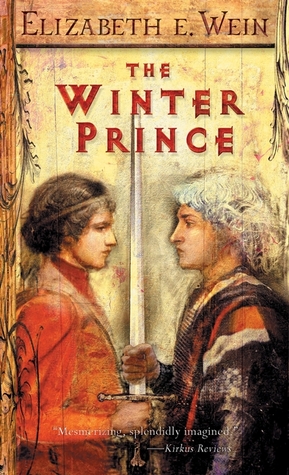 The Winter Prince by Elizabeth Wein. Atheneum, 1993.
Here we are introduced to Medraut, who adores his mother even as he knows he’s abused by her.  He also comes to love his half-siblings, Arthur’s children by Guinevere, twins Lleu and Goewin, even as he is madly jealous especially of Lleu, who will inherit the throne.  Taut plots, complex characters and divided loyalty in a vividly researched historical setting set the tone for the rest of the series. 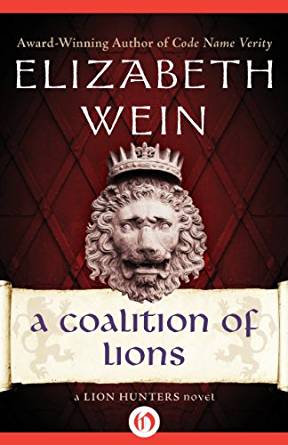 A Coalition of Lions by Elizabeth Wein. Viking, 2003.
The world has turned upside-down, with a gap of several years between the end of The Winter Prince and the beginning of this book.  Arthur and Lleu are dead, Medraut disappeared, Britain in chaos.  Goewin travels to Aksum, the kingdom of Ethiopia as the ambassador of Britain, a post that Medraut once held, going with Priamos, the Aksumite ambassador to Britain.  There, she meets young Telemakos, the son of an Aksumite princess, and very clearly also Medraut’s son, with his almost white hair.  With danger to herself and both kingdoms, Goewin must use her wits and every bit of advantage she can get from being underestimated as a woman.

The Sunbird by Elizabeth Wein. Viking, 2004.
Some years after A Coalition of Lions, Medraut’s son Telemakos is now about 12 and from here on out in the series, the main point-of-view character.  He’s both part and not part of the Aksumite court, related to royalty on both sides, but not fully Aksumite and not living in the palace.  When Aksum is hit by plague, the emperor makes the painful decision to cut off a port city to halt its spread.  Telemakos has long practiced being able to go places unobserved, so when it’s clear that unscrupulous merchants are breaking the quarantine to keep trade routes open, he comes up with a plan to travel to the salt mines to figure out who the traitors are.   Everyone knows it will be dangerous, but it turns out to be more dangerous yet. 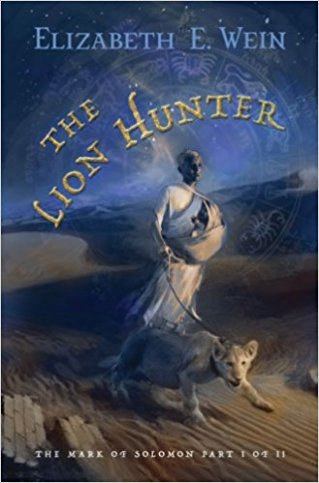 The Lion Hunter by Elizabeth Wein. Viking, 2007.
Telemakos is back from his ordeal, but hardly unscarred.  He’s clearly suffering from PTSD, and a moment of inattention costs him dearly.  One joy in his life is a new baby sister, Athena, with eyes as grey as the goddess.  But though Telemakos has fallen in love, his parents are filled with guilt over Telemakos’s condition and unable to pay attention to the baby, whereupon develops one of the closest and sweetest sibling relationships I’ve seen in fiction, despite the large age gap between them.  The sweetness is necessary to counteract everything else, because political victory is never as simple as it seems.  It looks like Telemakos’s cover has been blown, with death threats being delivered to his grandfather’s house… Note this ends on a cliffhanger and the next book picks up immediately afterward, without the gap of months or years that happen between the other books.

The Empty Kingdom by Elizabeth Wein. Viking, 2008.
At the end of the last book, Telemakos and Athena traveled to the kingdom of Himyar, ostensibly for Telemakos to study with the royal astronomer there, but really to keep him safe.  Once there, however, it appears that Himyar is not as safe as they thought.  The coils of politics wrap Telemakos ever tighter, and any actions he takes could put little Athena at risk as well as himself.  Many details bring the story to life, from Telemakos’s difficulties writing or throwing a spear one-handed to hunting trips in the desert and complex politics both inside Himyar and between it and other kingdoms.

Telemakos through the series is gifted in so many areas that he might have become one of those characters so perfect that we love to hate them.  And yet, he skirts around this with sadly balanced load of difficulties given to him and by not recognizing himself to be as perfect as he might seem from the outside, along with making his share of mistakes.   The series came up discussing historical and Arthurian fiction with Rachel Neumeier at the last KidLitCon, both of us liking both types of fiction.  Devoid of magic, and with most of the action taking place after Arthur’s death, this is more of a fantasy-feeling alternate history, similar to The Thief by Megan Whalen Turner.  For those who like medieval historical fiction, political fiction, and sharply-drawn characters strongly tested – this is fantastic.  While there is quite a bit of violence, there’s only a small amount of understated romance, making it good for advanced middle school readers on up.  The older print versions should still be available in libraries, and the series was re-released in ebook format, which I was able to get through my library’s download service.

Here are a few other political fantasies I’ve enjoyed:

Do you have favorite political historical/fantasy books?  Or favorite Arthurian series?

7 Responses to The Lion Hunters Series