A Crack in the Sea by H.M. Bouwman

The last time I wrote about an eligible, not-yet-nominated Cybils book, it was nominated before I posted my review.  Will the same thing work again? (Cybils nominations close October 15, if you haven’t yet nominated!) 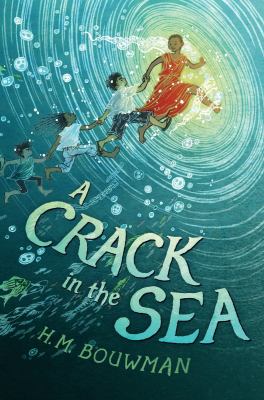 A Crack in the Sea by H.M. Bouwman. Read by Bahni Turpin. Putnam, 2017.
Orphaned siblings Kinchen (about 12) and her younger brother Pip live on an island in the Second World, cared for by a grandfatherly man with rare pale skin.  Kinchen has always worked very hard to protect Pip from others – he communicates well with fish and can breathe underwater, but (like Finn in Bone Gap) can’t distinguish between human faces.  But when the King of Raft World learns about Finn’s ability, he decides that he needs Pip’s abilities, whether or not he has permission to take Pip.  One of the many storylines in the book follows Pip and Kinchen’s separate stories, with Pip learning what it is the Raft King wants as well as learning how to deal with people on his own, and Kinchen trying to find a way to get Pip back.

But we also learn the story of the discoverers of the Second World, Venus and Swimmer, 18th century Africans from our world who were thrown off the (very real) slave ship Zong and found their way through a crack in the ocean to a small but safe tropical world.

Another storyline follows Tan, a 12-year-old Vietnamese boy and his older sister Sang in 1978 as they try to escape the oppressive conditions in a tiny fishing boat.  Things are very precarious between the rough seas and the pirates looking to prey on them and other similar refugees.  Will they find their way to safety?

All speculative fiction asks questions about the world.  Here, underlying the happiness of an escape route for people in horrible situations is the sad knowledge that there was no such refuge for the people who really lived them.  At the same time, the author asks, explicitly in an afterward,”Why can’t we welcome everyone in such dire straits with love?” It could have been too preachy, but I still believed in the characters here, cared about their fates, and the Second World and the magical abilities were fanciful and inventive enough to keep the book appropriate for at least an older middle grade audience.

The audiobook is ably read by the multi-talented Bahni Turpin, here with a variety of African and Vietnamese accents over and beyond her already demonstrated ability with African-American voices.  My own twelve-year-old and I both listened to and enjoyed this book very much, and it’s one that my thoughts have kept returning to since I read it.

I'm a librarian and book worm who believes that children and adults deserve great books to read.
View all posts by Katy K. →
This entry was posted in Books, Reviews and tagged African, Asian, youth audiobooks, youth fantasy. Bookmark the permalink.

8 Responses to A Crack in the Sea by H.M. Bouwman