Who says a book starring a person of color has to be dark and realistic?  Or that it takes darkness and realism to make a serious statement?  I finally tracked down these books that I’d been wanting to read since I first read about them on the Book Smugglers. 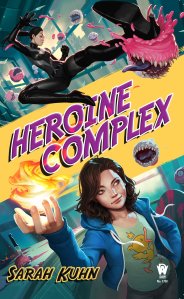 Heroine Complex by Sarah Kuhn. Daw, 2016.
Evie Tanaka is the personal assistant to San Francisco’s favorite superheroine, Aveda Jupiter.  They’ve been best friends since grade school, when Evie and then-Annie Chang were best friends who stuck up for each other in the face of the teasing they got for being the only Asians in school.  Now, though, demon portals are opening up all over San Francisco, and Evie’s in charge of making sure that Aveda Jupiter has everything she needs to slay the demons and look good doing it.  Also on Aveda’s team are the lusty weapons master and bodyguard Lucy, who can charm every woman she meets except the owner of the trendy cupcake shop where demons most recently appeared, as well as the team’s handsome but antagonistic scientist and doctor Nate.  In addition to managing the team, Evie also has to deal with her rebellious teenage sister, Bea, and Scott, who used to be part of a trio with her and Aveda but now won’t talk to Aveda.  Meanwhile, they’re followed by a backstabbing blogger, Maisy, who only pretends to be friendly. There’s a lot of facing down personal demons and some romance (including sexytimes), as well as fun San Francisco locales and time in the karaoke bar, all while battling demons who take the shape of whatever they first find when they cross through – like cupcakes.  Issues like racism and sexism are present but take backstage to the sheer awesomeness and fun of the characters.  Really, how can you go wrong with demon cupcakes?

Heroine Worship by Sarah Kuhn. Daw, 2017.
In book two of the trilogy, Aveda Jupiter takes center stage, set against a bridal industry that’s literally possessing brides.  There’s been no recent demon activity, so Aveda pours all of her considerable energy into planning Evie’s wedding as her maid of honor.  Aveda’s perfectionism runs head-on into Evie’s much more casual style, causing problems between the best friends.  Things go from bad to worse when the designer chiffon dress with red flowers at the neckline that Annie loves is literally possessed, first trying to kill Evie and then turning her into a bridezilla.  Soon, Bridezilla fever is spreading through San Francisco.  With Evie affected, too, Aveda turns to her old, estranged friend Scott for help.  We also meet San Francisco’s other superheroine, Shruti, whose powers have been stepping up even as she’s running a successful vintage clothing business.  Blogger Maisy is still present, supposedly reformed – but can she really be trusted?  And Evie’s little sister Bea is taking on increasing responsibility, getting ready to take center stage herself in the third book in the series.  Heroine’s Journey is out this summer, just in time for me to try to track it down.

I'm a librarian and book worm who believes that children and adults deserve great books to read.
View all posts by Katy K. →
This entry was posted in Adult, Books, Fantasy, Print and tagged #OwnVoices, adult fantasy, San Francisco, superheroes. Bookmark the permalink.