I read the first of this on-going series of novellas back in January, and squeezed in the most recent two now, before buckling down to full-on Cybils reading.  In the meantime, the first book, All Systems Red, won this year’s Hugo for best novella.  Congratulations, Ms. Wells!

“Murderbot” is the name the security unit gives itself – part synthetic, part organic, somewhere between robot and human.  It prefers to be left alone, even more preferably with lots of downloads and entertainments, but still does everything in its power to save its clients, and always with a dry and self-deprecating sense of humor.

In All Systems Red, Murderbot has been assigned to a scientific research planetary expedition, run by scientist Dr. Mensah.  The group is uncomfortable having a SecUnit, but it’s a requirement of the bonding company that’s underwriting their expedition.  This proves to be a good thing when one of the scientists is attacked by an enormous monster that wasn’t listed in the planetary security briefing.  Soon, Murderbot and the rest of the team are racing to find out what else has been left out of their briefing and why. 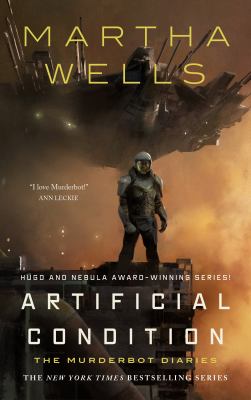 In Artificial Condition (avoiding spoilers as much as possible, Murderbot has been traveling around on unoccupied space ships, bribing their intelligent operating systems to let it onboard by sharing its entertainment series.  Murderbot has only the vaguest of memories left in its organic parts of the horrible incident where it helped kill thousands of people, since the memories were deliberately wiped from its construct parts.  But what would cause it to do such a thing? A particularly annoying system helps Murderbot create a disguise as a normal augmented human so that it can gain access to the planet where the horrible incident takes place.  One hitch: Murderbot is forced to take a job as a security consultant to yet another group of too-trusting scientist types.

In Rogue Protocol, Murderbot is on yet another ship, this one with people, trying to investigate the shadowy GrayCris Corporation that seems to be behind so much slaughter.  Mixed in with all the plot action of these books has always been the awkwardness of a sentient machine that looks mostly like a human but isn’t quite one.  Here, the awkwardness is dialed up to 11 as Murderbot has to befriend a sweet, trusting robot named Miki, who’s treated as a pet by its owners.  Miki, of course, has never had to deal with the gruesome situations that Murderbot has been put into, and so has a level of trust with humans that’s never been possible for Murderbot.  They’re going to have to find a way to work together, though, to deal with the giant and very hostile combat robots that turn up.

I’m going to join with Ann Leckie (whose blurb is on the cover) to say that I love Murderbot.  Anyone who doesn’t always like dealing with frustrating, inconsistent humans will find Murderbot instantly relatable.  Thanks to Charlotte, who pointed out on her blog that these novellas, all around 150 pages, are perfect for the reluctant teen reader – short, with lots of action and a great character to pull things along.  There is enough foul language to give kids the thrill of reading adult stuff, while Murderbot has a disdain for “sex parts” that also works well for those who don’t care for romance.  I’m now reading the first book aloud to my son, with explicit instructions that he’s welcome to read ahead any time he can’t wait to find out what happens next. We’ll both be waiting for the next book in the series!

11 Responses to The Murderbot Diaries 1-3