The Assassination of Brangwain Spurge by M.T. Anderson and Eugene Yelchin 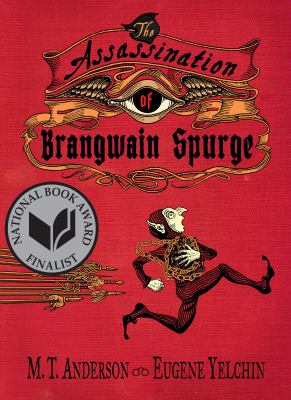 The Assassination of Brangwain Spurge by M.T. Anderson and Eugene Yelchin. Candlewick, 2018.

M.T. Anderson is always coming up with new ideas – as in, his books are so very different from each other, from the dark, futuristic teen sci-fi Feed to the wacky mysteries of the middle grade Pals in Peril series to the recent Arthurian legend graphic novel adaptation Yvain.  All over the place.

This most recent book, like Yvain, relies heavily on the illustrations.  The story is told in three different voices.  The first is that of the titular character, Brangwain Spurge, elfish ambassador to the goblins.  He sends magical transmissions back to the elves that come out looking like 16th-century woodcuts – except that one wouldn’t expect to see a woodcut of an elf flying through the air in a barrel as he is sent by giant crossbow over the mountains to the land of the goblins.

There are also chapters from the point of view of Werfel, Brangwain’s goblin host and fellow scholar.  Werfel is trying his best to be an excellent host, and looking forward to good scholarly talks with Brangwain.  Brangwain, though, is convinced that the goblins are horrible barbarians, and finds evidence of this everywhere, from the insults goblins exchange with their closest friends to the way they save their shed skins as reminders of their past selves to the sounds of the goblin opera.

Short chapters also come in the form of reports to the king based on Brangwain’s transmissions from the snooty Lord Ysoret Clivers, of the secret Royal Order of the Clean Hand, who bullied Brangwain at school.  It’s clear that he chose Brangwain as an ambassador partly because he really doesn’t care what happens to him.

So Brangwain and Werfel are spending lots of time together, filled with misunderstandings that show up in the drawings – for instance, a parade of goblin women with medicinal flowers shows up in Brangwain’s transmissions as a parade of headless women juggling their heads and carnivorous plants with chomping jaws.

Then, things start to get bad.

I enjoyed this so much, and it’s definitely one that bears re-reading as there are so many details and much to think about.  It’s one of those odd books that’s written for younger people – maybe kids, maybe teens – but is about adult characters.  It was shortlisted for the National Book Award for Young People’s Literature, though first place went to the wonderful Poet X. Go find yourself a copy!

This book has been nominated for the Cybils award.  This review reflects my opinion, not that of the award committee.

2 Responses to The Assassination of Brangwain Spurge by M.T. Anderson and Eugene Yelchin