The Last Last-Day-of-Summer by Lamar Giles

Thank you so much to Versify for sending me an ARC of this book to review! The book was officially published April 2. 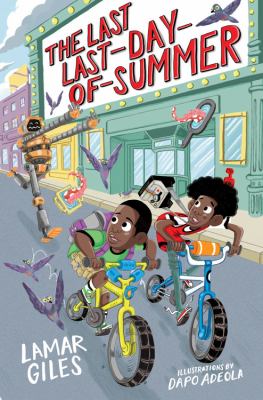 It’s the last day of summer.  Otto is determined to have one last grand adventure with his cousin Sheed, even if Sheed would rather sleep in.  After all, the Legendary Alston Boys have a reputation to keep up, and similarly aged twin sisters the Epic Ellisons have earned one more key to the city than the boys have. Something strange is almost always happening in their county.  Sure enough, the boys run across a man in a suit and top hat with an old-fashioned camera who promises to make the last day of summer last forever. This goes about as well as the reader might expect – time is stopped, with everyone but the Otto and Sheed unable to move but aware of what’s going on.  Another strange person appears – this one a cool-looking time traveler with dreadlocks – who offers to help them. They also meet many interesting characters who are personifications of various times of day – the Golden Hours, Bed Time, Father Time, Witching Hour and so on.

This is Lamar Giles’s middle grade debut, though he’s written many popular teen thrillers, including Fake ID. This book is illustrated in an appealing cartoon style and filled with high-speed and high-stakes but still often slapstick adventure. it felt like a longer and more fleshed-out Phineas and Ferb, though there was a darker twist at the end that caught me off guard. Otto and Sheed were engaging and distinct characters, though I’d hope for more of the Epic Ellisons in a future book – they were literally frozen for most of this one.  The Last Last-Day-of-Summer was a little more thriller-like than I prefer, but as I’ve mentioned before, my tastes tend to run more to character than fast-moving plots, and most kids (including my own) disagree with me on this.  I will happily put this book in the hands of kids looking for diverse protagonists or just a fun, fast-paced adventure.