Here’s a trio of fun early chapter books!  Because Cybils nominations will be opening up October 1, I’ve added notes on which books would be eligible to be nominated.

Juana & Lucas: Big Problemas by Juana Medina. Candlewick, 2019. 978-1536201314
It’s been three long years since we first met Juana and her dog Lucas, growing up in Bogotá, Colombia. I was so happy to see her again!  In this book, we meet more of Juana’s neighbors and family members. Now, years after Juana’s father died in a fire, Juana’s mother is falling in love again.  This leads to the big problemas of the title: the horrible idea of her mother getting married and Juana not having her all to herself, moving to a new house, and having to wear a scratchy dress for the wedding.  In the end, of course, love and Juana’s big personality win. I still adore Juana, and wish that we had many more books about her. This came out this year and is eligible to be nominated for a Cybils award. 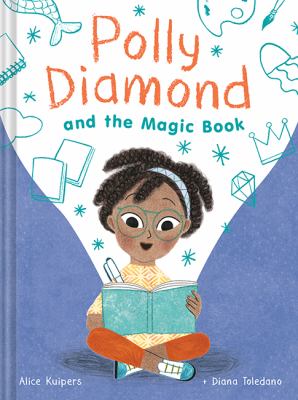 Polly Diamond and the Magic Book by Alice Kuipers. Illustrated by Diana Toledano. Chronicle Books, 2018. 978-1452152325
Polly Diamond has a baby brother on the way.  The problem with that is that when he arrives, she’ll have to share her room with her little sister – ugh! Then, a magic book arrives in the mail.  With the help of the book (and an inobservant babysitter) she’s able to remake the house into something a little (okay maybe a lot) bigger, and much, much more fun – except maybe for the part about turning her sister into a banana. Charming illustrations illuminate both the family and Polly’s wishes.

Polly and her family appear to be African-American; the author is white and the illustrator is Spanish-American. It might be rainbow sprinkle diversity to show Polly and her family as Black when there’s nothing else linking them to African-American culture, but the story about her adjusting to her new family size is heartfelt, and the wishes are over-the-top silly in a way that feels enormously appealing to kids.  It’s also relatively rare to find kids books where the main characters wear glasses.

This book came out in May 2018, and is thus not eligible for the Cybils this year (though it’s now out in paperback for those looking to purchase!), but the sequel, Polly Diamond and the Super Stunning Spectacular School Fair, is eligible.  Mia Mayhem is a Superhero! by Kara West and illustrated by Leeza Hernandez, which came out in December of 2018 and is therefore also eligible this year, looks like it would appeal to a similar audience.

Phoebe G. Green: Lunch Will Never Be the Same by Veera Hiranandani. Grosset & Dunlap/Penguin, 2014. 9780448466958
I looked into this older early chapter book series by Newbery Honor-winning author Hiranandani.  Phoebe, who is white, gets school lunches, and her parents “assemble” the same rotation of simple meals for dinner each week at home.  When a new girl from France, Camille, comes with very fancy lunches, which Phoebe describes in numbered lists, it’s a revelation to Phoebe.  She tries her best to get a dinner invitation from Camille, because if her lunches look amazing, the dinner must be truly spectacular. In the process, though, she ends up alienating her best friend, Sage (who is of East Indian origin), and Camille also isn’t sure that Phoebe really wants to be her friend.  There is lots of yummy food, some very believable friend issues, and it made me laugh out loud. The only thing that would have made it better would be if the POV character could have been East Indian, like the author. And if there were more than four books in the series, because four books is not enough to satisfy avid early chapter book readers.