Today I’m featuring a couple of middle grade speculative fiction books that are eligible but not yet nominated for the Cybils. (You can nominate books here.) Both feature kids flying on the backs of fantastic beasts! 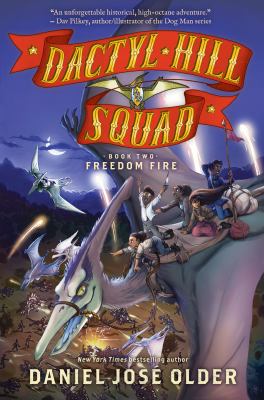 Freedom Fire. Dactyl Hill Squad 2 by Daniel José Older. Arthur A. Levine/Scholastic, 2019. 978-1338268843
Magdalys Roca’s story that began in Dactyl Hill Squad picks right up again here, as she and the other residents of the Colored Orphan Asylum are flying on the back of the giant pteranodon Stella to the Civil War battle lines to look for her brother, who has been injured in battle.  They run into fighting almost immediately, and the rebel army isn’t about to give a creature as large and dangerous as Stella a pass just because she’s carrying kids. When they find the Louisiana Native Guard, Magdalys is pressured into helping them before continuing the search for her brother, because it turns out that Magdalys’s skill of speaking to dinos is one that’s only been used in battle by the Confederates, leaving the Union army at a decided disadvantage.

We get to know lots of interesting characters in the Louisiana Native Guard (though some of them did blur together), as well as getting a closer look at Magdalys’s friend and fellow orphan Mapper and his motivations. There is a lot of action and a fair amount of violence, but also a serious look at the trauma of gun violence, even if the kids would rather shoot than be shot themselves.  Once again, actual people and battles are referenced, though the timeline is compressed, with references for further exploration given in the afterward. This is another stellar entry in the series.

Spark by Sarah Beth Durst. Clarion Books/HMH, 2019. 978-1328973429
“Mila was quiet” opens this story of a quiet girl in a loud family.  She’s been working for years to bond with a dragon egg, but when it hatches, it comes out a lightning beast – not the quieter dragons of sun, wind, and rain that help to regulate the climate of her country.  Lightning dragon riders are known for their boisterous temperaments, but Mila thinks her beast is perfect. She goes off to the lightning school over her parents’ objections and slowly begins to make a place for herself.  But when she and her dragon blow over the mountain border during a storm, she learns a horrifying secret. Can she find a way to way to spread the word while staying herself?

Spark blends a sweet story of a girl’s bond with her dragon and a quiet girl learning to make friends with a strong environmental message. The message that even a quiet person can find a way to be heard and make a difference is also strong – in this case, by working with other people and making a space for the people truly affected to speak for themselves.

2 Responses to Freedom Fire and Spark