The Hero’s Guide to Saving Your Kingdom 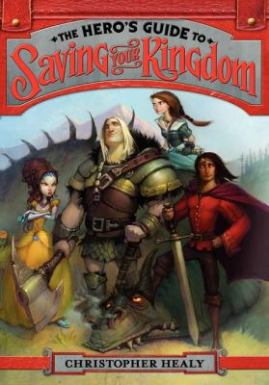 The Hero’s Guide to Saving Your Kingdom by Christopher Healy

Why is it that the princes from all the fairy tales are simply called Prince Charming?  According to this book, it’s because the bards are more interested in a good story than in getting the facts right.  We start the book by meeting a different Prince Charming, one chapter at a time.  Prince Frederic, a risk-averse dandy, loses bold Ella when she realizes that marrying him wouldn’t be the adventure she was hoping for.   Rapunzel leaves Prince Gustav when she realizes he’s more brawn than either brain or heart.  Handsome and arrogant but kind-hearted Prince Liam is driven out of two kingdoms when he tries to break off his engagement with the shallow and cruel Briar Rose and she in return has a bard make up songs lambasting him.  Loopy Prince Duncan, happily married to Snow White, gets literally lost when she asks for a little space and he wanders off in the woods.  All four of the Princes have ballads written about them in which they are called Prince Charming.  They meet, and get involved in heroics involving stopping the evil witch Zaubera’s multiple evil plans, and dealing with the child robber king Deeb Rauber.  To give a small degree of gender balance, both Ella and Liam’s little sister Lila are on their own heroic missions, which may or may not intersect with those of the Princes Charming.

The whole thing is written in a slapstick style, with cartoonish illustrations chapter titles like “Prince Charming Defends Some Vegetables” and “Prince Charming Annoys the King”.  The four princes started out so very one-dimensional that it was really hard for me to feel enough sympathy for them to enjoy the story.  At the halfway point, I was still considering giving up on it altogether.  However, soon after that, they begin to come together as a team and experience Personal Growth that makes them both more sympathetic and interesting.  There are just enough plot threads left dangling at the end to expect a sequel.   I still prefer Sondheim’s Into the Woods or the adult graphic novel series Fables for massive fairy tale integration, though both of those are best for adults.  However, middle grade children looking for a light (if lengthy) read will probably like this.  It’s full of action scenes that will appeal to boys – I could see my son eating this up.  Readers could also try the Sisters Grimm series by Michael Buckley for a modern fairy-tale integration for middle grade readers.

I'm a librarian and book worm who believes that children and adults deserve great books to read.
View all posts by Katy K. →
This entry was posted in Books, Uncategorized and tagged fairy tales, youth fantasy. Bookmark the permalink.

1 Response to The Hero’s Guide to Saving Your Kingdom