Well, I still want to pull together my favorite books of 2019.  I still have lots of books that I’ve read to review.  But it’s been three and a half weeks since I’ve been in my library – the longest time I haven’t been in a library in nearly a decade.  For all of you who, like me, are newly restricted to the electronic library offerings, I thought I’d put together some lists of tried and trusted books available there.  I’m starting with audiobooks, since that’s what I personally have used the most.  Links are to my full reviews where available; Libby availability varies by library.

Ambassador and Nomad by William Alexander. Narrated by the author. Audiobook only.

Chronicle of the Dark Star by Kevin Emerson. Narrated by Kevin T. Collins. Available as both an ebook and an audiobook. Ebooks also on Libby.

The Incorrigible Children of Ashton Place by Maryrose Wood. Narrated by Katherine Kellgren. Available as both an ebook and an audiobook.

Kiranmala and the Kingdom Beyond by Sayantani DasGupta. Narrated by the author. Audiobooks on hoopla; ebooks and book one audiobook on Libby.

Love Sugar Magic by Anna Meriano. Narrated by Kyla Garcia. (Book 1 is on Libby; books 2 and 3 are on hoopla. Available as both an ebook and an audiobook.)

The Magic Thief by Sarah Prineas. Narrated by Greg Steinbruner. Available as both an ebook and an audiobook. 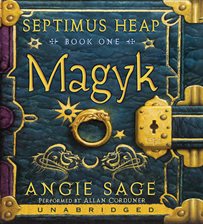 The Unintentional Adventures of the Bland Sisters by Kara LaReau. Narrated by Rosalyn Landor. Available as both an ebook and an audiobook.
This series for younger middle grade readers stars two sisters who’d really just like to stay home drinking their tepid tea, but keep being drawn into adventures instead.

Upside-Down Magic by Sarah Mlynowski, Lauren Miracle, and Emily Jenkins. Narrated by Rebecca Soler. Audiobooks on hoopla; ebooks and some audiobooks on Libby.
Nory’s father is the principal of a magic school – but she can’t do magic the right way. She often turns into a written – part dragon, part kitten – instead of a plain kitten. She’s sent to a different school for fifth grade, where she can join a class of other kids whose magic doesn’t work the way people expect it to. We get to know all of Nory’s classmates – diverse both ethnically and magically – better in each book of the series.

What are your favorite downloadable library books? What kind of lists would you want to see from me?