It’s time to pay a visit to Mars with this exciting Cybils-nominated science fiction title. 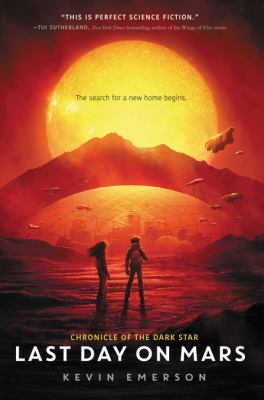 Last Day on Mars by Kevin Emerson. Harper Collins Children’s, 2017.
As the story opens, a beautiful blue alien scientist sets up an observatory on Mars, with some fond thoughts about humans, and then is murdered.

Much later, former residents of Earth have established a colony on Mars as a stepping stone to leaving the solar system.  The sun is expanding to the point where life on Earth is no longer possible, and very soon now, it will take over Mars as well.

Our guide to this is Liam, a twelve-year-old who was raised on Mars.  (His parents have told him he has ancestors from four different continents on Earth, but he doesn’t see why this is such a big deal as he considers himself Martian.) Departure is scheduled for just days away, and he and his friends Phoebe and Shawn are having a hard time seeing the need to cooperate with school in the meantime.  Their parents are all scientists working on critical terra-forming for the eventual home planet, racing against time as the sun gets larger and the need to leave grows ever more urgent.

Liam’s teen-aged sister Mina is set to board the big colony ship a day or so ahead of Liam.  She gives him – just temporarily until they’re together again and she can give it to her boyfriend – a radio signal necklace that pairs with one that she has.  This turns out to be critically important as the stakes get higher, with lava tunnels exploding just for a start.  There are daring chase scenes, dastardly villains, quite startling plot twists, and a friendly robot butler.  I’m not going to say too much more here – just go read the book.  You’re welcome.

There have been so many great middle books about Mars!  Here are a few I’ve enjoyed:

Standard disclaimer: This book has been nominated for the Cybils award.  This review reflects my opinion, not that of the committee.

4 Responses to Last Day on Mars