Secrets of the Dragon Tomb

I’m sure I first heard about this book through Stephanie Burgis’s Livejournal page – and I’m glad I did, because steampunk on Mars is right up my alley.  This book made it to my Top 10 Middle Grade Fantasies That Make Me Laugh out Loud. 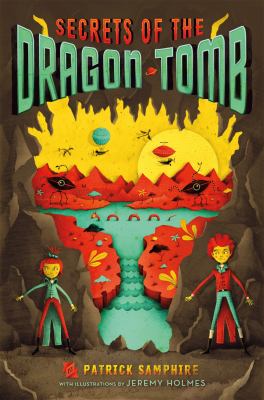 Secrets of the Dragon Tomb by Patrick Samphire. Illustrated by Jeremy Holmes. Christy Ottaviano/Henry Holt, 2016.
It’s clear that Secrets of the Dragon Tomb is going to be high humor and high action right from the beginning, as our hero, 12-year-old Edward Sullivan discovers that crannybugs have invaded the attic of his Mars house and are building themselves a glass mansion there right before he and his cross-dressing younger sister Putty find themselves suspended from a cliff.  (Wearing trousers isn’t cross-dressing nowadays, of course, but in the Victorian era this book is set in, Putty is a shocking little girl!) The action heats up from there as long-lost handsome but spacey “cousin” Freddie (actually an old family friend) literally falls from the sky in time for dinner.  This causes a commotion for both the older sisters: flirty Jane and more serious Olivia.

When an evil former suitor kidnaps Edward’s mother, father and sister Jane, hoping that Edward’s brilliant father will be able to lead them to a presumably treasure-filled undiscovered ancient Martian tomb, it’s up to Edward, Putty and Cousin Freddie to stop the villains and rescue the family.

This is (perhaps oddly) the first steampunk I’ve seen to combine space travel and the real Victorian obsession with Egyptology ala Elizabeth Peterson’s classic Amelia Peabody mysteries.  I loved all the creative twists included here, including robutlers, the space tunnels between Earth and Mars, Edward’s favorite magazine Thrilling Martian Tales, and the huge sense of fun through the whole book.

There was actually a little too much non-stop action for me, though I couldn’t help thinking while reading it that it would be perfect for my son, who’s also a steampunk fan but enjoys plot first where I read more for character.  On the character front, though, while the diversity in the story is very limited, Edward’s background-appropriate prejudices about gender and class are proven wrong multiple times.  This is especially evident in Edward’s assumption that he will have to rescue all of his sisters, only to have them rescue themselves and him. I’m definitely looking forward to the next book coming out.

Pair this  with Phillip Reeve’s Larklight series and read other takes on it at Charlotte’s Library and Random Musings of a Bibliophile.

4 Responses to Secrets of the Dragon Tomb