I’m very fond of Garth Nix – but this is very much a break from the weighty feeling of his Old Kingdom and Keys to the Kingdom books. It would fit very nicely on my hypothetical list of teen fantasies that make me laugh out loud. 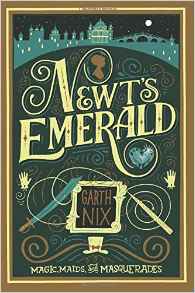 Newt’s Emerald by Garth Nix. Performed by Faye Adele. HarperCollins, 2015.
Lady Truthful Newington is cheerfully planning her upcoming London debut, with only mild references to her lack of the strong magical talent common to her family. Her cousins the three Newington-Laceys, who are as close as brothers, come to celebrate her birthday. But when Lady Truthful’s father takes out the legendary gem of power, the Newington Emerald, that will someday be Truthful’s, it disappears in a crash of thunder. Lord Newington is incapacitated; Truthful, for the first time in her life, finds herself the only person capable of doing something.

Her Great-Aunt in London, however, is prepared to help Truthful with the basic problem that she cannot go traipsing about London in search of clues as a young, unmarried woman: a magical disguise tied to a fake mustache, so that Truthful looks like a young male French cousin. It’s just her luck that the person she meets who might best be able to help her track down the clues to the emerald hates both Frenchmen and women.

This is a sparkling Regency alternate history adventure-fantasy featuring a hate to love romance filled with witty repartee while staying quite proper physically. While there’s lots of silliness – you can tell just from having a heroine named Truthful working in disguise – it’s still filled with great characters. I trust Nix not to write women down, and he does not disappoint. Truthful is just learning her own strength, but her great aunt is a woman of indomitable spirit who is well aware of hers, and guides Truthful in how best to do what she feels needs to be done while keeping up the appearances demanded by society. It’s beautifully read by Faye Adele.

Pair this with Sorcery and Cecilia by Patricia Wrede and Caroline Stevermer.

I'm a librarian and book worm who believes that children and adults deserve great books to read.
View all posts by Katy K. →
This entry was posted in Books, Reviews and tagged historical fantasy, humor, Regency England, teen fantasy. Bookmark the permalink.