The Exiles by Hilary McKay (series)

It was almost exactly three years ago that Charlotte, commenting on my review of Saffy’s Angel, suggested that I try The Exiles as well.  I thought at the time that this book might be fantasy, thus explaining why so many of my fantasy-reading friends loved it – but it is particularly British-feeling family fiction.  I had to interloan it, so it took a while to burble to the top of my reading list.  Once I read the first one, though, I moved on to the others directly. 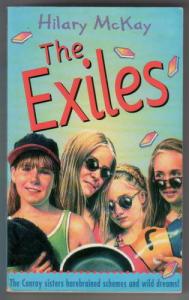 The Exiles by Hilary McKay. Victor Gollancz Ltd., 1991 (UK); Margaret K. McElderry Books, 1992 (US).
(Winner of the Guardians Children’s Award) Meet the Conroy family: 13-year-old Ruth, 11-year-old Naomi, 8-year-old Rachel and 6-year-old Phoebe, who live with their weak-willed mother and an indulgent father.  When the family inherits a large sum of money, the girls all assume that it will be split evenly among all the children for them to do with as they like.  Instead, their parents decide to remodel the house, and pack the children off to Big Grandma’s house on the coast for the summer.  (Here I am very suspicious of Americanized language: is it Big Granny in the British edition?) 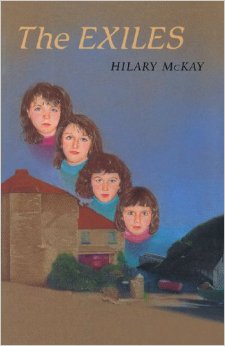 Big Grandma has decided – in a preemptory fashion that made me very uncomfortable – that the girls have serious character flaws caused by too much reading.  She allows them to read only the small supply of books they brought with them, Shakespeare, and her cookbooks.  It seems to be set in the 1980s, so it was puzzling and somewhat distracting (again) wondering why there is no mention of TV or video games, and why reading would be considered such a horrible summer activity.  These concerns were soon pushed aside – the lack of books leaves room for some classic Swallows and Amazons-type adventures, sans boats: gardening, hiking, cookfires on the beach, and exploring abandoned mines.  Phoebe, the youngest, never does give up hoping that her parents will send her share of the money, even as she’s peacefully dangling a fishing line into a bucket holding nothing but water.  Her letter home: “I hop you will send my muny sun”  Do note, though, that while most of the book is funny and heartwarming, the ending is quite tragic for booklovers.

“If we’re going to be out all day,” suggested Ruth, “we could make a fire and cook our dinner on it. We don’t like sandwiches.” “Do you know how?” asked Big Grandma, “Have you ever done it before?” “You learn it in the Guides,” replied Ruth cautiously, and none of her sisters gave her away by pointing out that she had been thrown out of that noble institution after only two weeks’ membership, on a charge of non-cooperation.” (p 74) 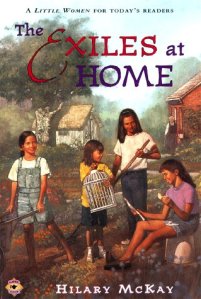 Exiles at Home by Hilary McKay. Margaret K. McElderry Books, 1994 (US), Victor Gollancz, 1993 (UK).
(Winner of the Smarties prize) We rejoin the Conroy sisters as they are bringing their report cards home and the Christmas holidays are beginning.  Their significant gifts include 10 pounds each from Big Grandma, and a sled for Rachel that she insists on sleeping with, even though it and she fall out of bed every night, usually hitting Phoebe on the way down or up again.  As school starts up again, Ruth comes down with chicken pox.  In the midst of a fever haze, she decides to use her 10 pounds to sponsor a school child in Africa – keeping it secret from her parents as Ruth believes she might be jailed for sponsoring a child while not yet 18.  But it costs 10 pounds a month – more than all the sisters’ pooled allowances.  Multiple money-making ventures ensue, a varied mix of successful and legal or not.  As one rather expects at this point, Big Grandma, called in for telephone advice by Mrs. Conroy, is the only one able to figure out what’s going on. 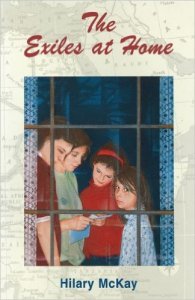 10-year-old Joseck, the African child they’re sponsoring, is kept a real person by sections told from his point of view, including things like eating beans and not-burned bread at home on the same day that he reads a letter from the Conroy girl describing the beans and burned toast they made for themselves.  I was also very fond of his young cousin (?) Mari, an independent soul who insists on unbraiding the elaborate braids that her grandmother puts in her hair every day.

As with the first book, McKay has an unerring sense for the logic of children – not illogical per se, but so very different from the logic of adults.  The book is filled with memorable characters, so much laugh-out-loud-humor, and still made me cry at the end. 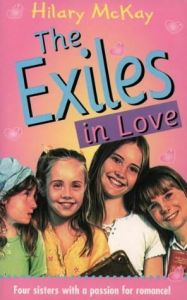 Exiles in Love by Hilary McKay. Margaret K. McElderry Books, 1996 (US), Victor Gollancz, 1996 (UK).
New to book three: a reflective point of view.  Many of the chapters begin with Ruth and Naomi discussing the events of the summer when they fell in love, leading up to something current but unnamed, before the book goes back to the events they’re remembering, two years after the first book.  Ruth is now 15 and enamored of Jane Eyre; Naomi at 13 ½ is exploring depressing Hausman poetry.  Rachel is 10 and mostly interested in food and looking beautiful despite her natural tendency towards extreme mess, while Phoebe at 7 is reading lurid John le Carre detective novels and looking at her family with a spy’s eye.

Fresh chaos descends on the family in the form of the family failing: falling uncontrollably in love.  The first object of Ruth’s affection is the tattooed bus driver, with the immediate effect that she is unable to get out her bus pass or climb on.  As she and Naomi both continue falling in love with more people, Big Grandma proposes that Mrs. Conroy host the son of the French family on whose farm they vacationed when Mrs. Conroy was growing up.  Hosting a cute French boy in the same house with four girls did not seem to me likely to cure crushes – but it certainly led to many more amusing situations. 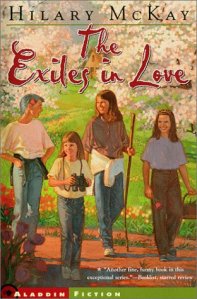 Too much of the humor is tied up in parts of the plot I don’t wish to spoil for you – so I will content myself with sharing some of the other things I found delightful.  Big Grandma, despite her objection to reading in the first book, really is a wonderful character.  Here, she very reassuringly treats falling in love as something unavoidable, like measles, rather than something one should be able to prevent, like acne.  She is also an active older woman who refuses to give up on living her life to the fullest, even when her daughter and granddaughters don’t understand what she’s doing.  Back to the girls, so many teen books show kids even in middle school happily dating.  This portrayal of teen crushes made of awkwardness, painful nighttime reflections on the object of one’s affections and possibly regrettable decisions much more closely resembles my own pre-teen and teen experience.  I wish more books showed this side of things! 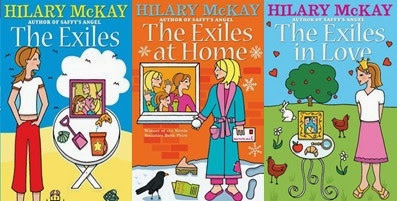 This is a delightful series that I am very glad I went back to.  There are only three main flaws with The Exiles series: 1. their lack of availability, which means I can’t just put any of the books in kids’ hands. 2. The covers – the updated covers on UK paperback editions are nice, but all I could find in libraries here were the boring and dated original covers – so hard to sell kids on and 3. That ending on the first book.

Both in this series and her more recent Casson Family series, McKay writes people who do things that seems absolutely crazy to describe out of context, but are utterly believable and feel like the truth being stranger than fiction when read as part of the book.  This is wilder than her Lulu early chapter book series, but all her series have a recognizable mix of vivid characters in situations that are both moving and funny. I plan to continue reading everything Hilary McKay writes.

3 Responses to The Exiles by Hilary McKay (series)