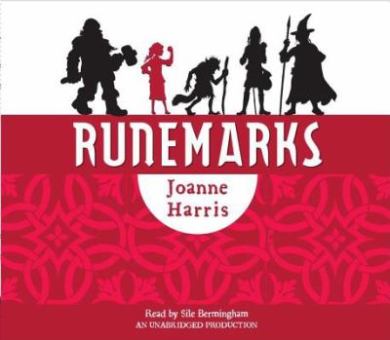 Once upon a time the Aesir ruled the Nine Worlds from their home in Asgard.  After Ragnarok, though, both the Aesir and their fellow gods the Vanir disappeared from the worlds.  500 years later, a girl named Maddy is growing up in the country, far from civilization but still not free from the influence of the Order.  The Order teaches that all the “Seer-folk” were wicked demons, and that people or animals born with their evil “ruin marks” on their skin should be killed.  Also, everyone should avoid dreaming to keep from being taken over by demons while they sleep.  Luckily for her, Maddy’s ruin-mark only makes her an outcast in her village.  Her only friend is the old traveling man who calls himself One-Eye.  He tells her that her “ruin mark” is actually a rune, an ancient sign of power.  He tells her the old forbidden stories of the gods, and teaches her to make and throw runes of power with her hands, as well as cantrips and charms.  As the village is invaded by more and more goblins, he tells her that war is coming.  Someone, for very unclear reasons, wants to destroy what’s left of the gods and any magic left in the world.  Maddy is the only one who can take the gateway under the large horse carved into the hillside, to travel to World Below and bring him back the ancient oracle known as the Whisperer.  There, Maddy meets a charming red-haired boy who calls himself Lucky.

I listened to this book with my son, who could not be convinced that Maddy was dealing with Odin and Loki.  It seems like it must be taking place in the Middle Ages to the Renaissance, but Maddy has quite modern sensibilities.  It seems that my Norse mythology was not quite as solid as I’d realized, because I was unaware of the difference between the Vanir and the Aesir, and trying to form a new alliance between gods I’d always thought of as part of the same pantheon takes a lot of time in the book.  Prophecy plays a major role, with the Whisperer telling the same prophecy different ways to different people, and other people putting yet different spins on it.  The book didn’t entirely work for me.  Bits that were mentioned briefly at the beginning and never came up again turned out to have major significance at the end.  The difference between runes, cantrips and charms wasn’t explained so I could understand it, though it felt like it would have been helpful to understand it.  Sile Bermingham read in an array of lilting British and Irish accents, which was lovely but a bit puzzling for a book about Norse people.  And while I enjoy character-driven stories, the whole thing felt like it was moving too slowly. It was 14 discs long, and things did not really start to heat up until the last two or three.  However, the premise was interesting and Maddy a likably sturdy and free-thinking girl, and my son really enjoyed it.  It’s rated for teens, probably for the length and a small amount of foul language (nearly all from Loki.)  The violence is certainly no more than in books like the Percy Jackson series.  Fans of those books who are interested in other books about forgotten gods in a more modern setting and don’t need the breakneck pace should enjoy this as well.

I'm a librarian and book worm who believes that children and adults deserve great books to read.
View all posts by Katy K. →
This entry was posted in Books, Uncategorized and tagged mythology, teen fantasy. Bookmark the permalink.