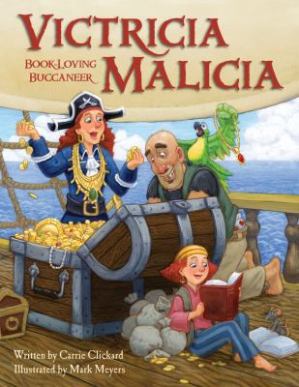 Victricia Malicia is a young pirate girl whose family members have all been pirates for generations.  Born on ship and taught pirate ways, everyone expects her to grow up to be a pirate.  But Victricia Malicia loves books and dry land.  Can she find a new life for herself and still keep the respect of her pirate parents and peers?  Only if she can show them that she’s still capable on board ship and find a way for her life on land to be relevant to them.  It’s just a little bit odd in concept, as the book looks like it’s meant for young pirate fans, who might wonder why Victricia would want to give up life as a pirate.  It’s still a funny story told in bouncy rhyme with bright, cartoony acrylic illustrations that will charm preschoolers and up.

The Pirates Next Door: Starring the Jolley-Rogers by Jonny Duddle

A Pirate’s Guide to First Grade by James Preller.

I'm a librarian and book worm who believes that children and adults deserve great books to read.
View all posts by Katy K. →
This entry was posted in Books and tagged picture books, pirates. Bookmark the permalink.