This is one that I found and bought for my library’s adult graphic novel collection. 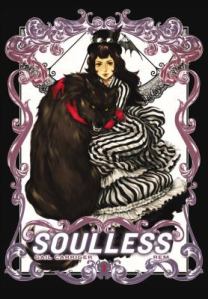 Soulless: the Manga by Gail Carriger. Art and adaptation by Rem.
I really enjoyed Gail Carriger’s Parasol Protectorate series (here’s my original review of Soulless. OK, maybe the middle missed a little of the playful sexuality between Alexia and Conall that was so enjoyable before and just after they got married – but overall, a delightfully strong steampunk series. It seems I’m not the only one to enjoy it, as it got picked for a manga-style adaptation. My verdict, having read the first two volumes: overall, very fun, if not flawless. REM chose to do one volume for each book of the series (all called Soulless, instead of having different titles, like the books.) Since each manga volume is shorter than the story it’s adapting, and pictures take more room than text in the first place, a lot of the story had to be cut. Basically, all the side plots. This is especially disappointing as one of our favorite characters, the cross-dressing inventor Madame LeFoux, doesn’t show up at all in the first volume. I spent a ridiculous amount of time studying Victorian fashion plates in high school, and so I noticed a few things in the mostly good fashions that struck me as odd – décolletage displayed in the morning and women who had definitely come out in society wearing their hair down in public. But, it’s a manga and alternate history, so perhaps some leeway should be given. I was also willing to give some leeway in the depiction of Conall, our werewolf hero, who just didn’t look large or mussed enough for me. That might be part of the manga style, though – he’s definitely bulkier than most manga men, who tend towards the reedy side, but I felt from his descriptions in the book that he should look imposingly large.

These quibbles aside, I really enjoyed the adaptation. It was wonderful to see Carriger’s steampunk world, with things like the flamboyant costume choices of Lord Akeldama and Alexia’s best friend. The genre-crossing spirit of the original came through loud and clear, despite being trimmed. I’d not recommend it without the novel, but for fans who can’t get enough and are waiting for Etiquette and Espionage, or for those who’d like a first taste before trying the original. It’s rated for older teens, and includes violence and strategically covered nudity.

I'm a librarian and book worm who believes that children and adults deserve great books to read.
View all posts by Katy K. →
This entry was posted in Books and tagged adventure, graphic novels, steampunk. Bookmark the permalink.

1 Response to Soulless, the Manga