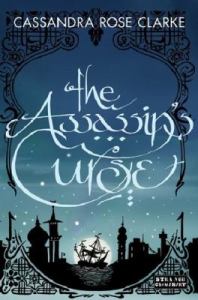 Assassin’s Curse by Cassandra Rose Clarke
The plot: Ananna of the Tanaru is a pirate captain’s daughter who always planned to captain her own ship one day. But her dreams are sent spinning when her parents betroth her to a captain’s son from another tribe. Her betrothed has no intention of ever letting her have her own ship, so naturally she runs away. Bad choice, as it turns out – her intended’s clan sends an assassin after her, with the message, “Marry him or die.” But when the assassin, Naji, catches up with her, she accidentally saves his life, triggering a curse that leaves them bound together and him required to protect her. They set off on a journey to break the curse, trying to dodge both of their numerous enemies. Naji uses his dark magic, and Ananna will have to learn to awaken hers if they are to have any hope of success.

The feeling: This is a romp of an adventure, with characters fully-drawn enough for us to care about them. There’s a hint of romance – it’s hard not be a bit smitten when a handsome-under-his-scars young assassin saves your life a few times – but so far, Naji doesn’t reciprocate the feelings and Ananna is a practical girl, not given to going moony over something she can’t have. (Assassin’s Curse is just the first in the series, though, so there’s time to build.) Instead, the book spends time building a tentative friendship between the two. That feels much more realistic for people who were, let’s remember, trying to kill each other at the beginning of the story. The plot has enough different strands going to be interesting without being overly complicated – no glossary of characters needed here yet. It is, however, a gloriously multicultural, full-color world, and Ananna describes herself as more full-figured than men generally find attractive. Sex is discussed in a general kind of way, and there is a body count, though definitely not a by-the-page or even by-the-chapter. There are (as previously stated) pirates, assassins, and magic, which makes this book just about perfect if you are in that kind of mood.

I'm a librarian and book worm who believes that children and adults deserve great books to read.
View all posts by Katy K. →
This entry was posted in Books and tagged adventure, pirates, teen fantasy. Bookmark the permalink.