This is the second and final book that I finished as part of the 48-hour Reading Challenge. 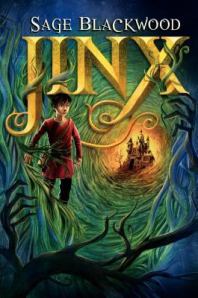 Jinx by Sage Blackwood.
Jinx is a young boy growing up in the Urwald, where one just learns to stay on the path, and better yet, stay in one’s own clearing. But his stepparents decide at the very beginning of the book that he’s no longer worth keeping, and sell him to the wizard Simon Magus. At least, his stepfather would have sold Jinx if he was willing to accept the price the wizard was willing to give him, but it’s really not such a good idea to stand around haggling in the Urwald. And now Jinx is warm and well-fed and treated gently for the first time in his life, and if the wizard is somewhat rude and doesn’t want to share his secrets – well, Jinx will probably find a way around that, at least the secrets. He meets Simon’s wife, Sophie, who lives on the other side of the solid stone wall in the secret part of Simon’s house. I’d somehow heard a lot about Sophie before reading the book, and have to agree that she is a most delightful character. Anyway (coming to a point where avoiding potential spoilers is tricky), one thing comes to another, years pass, and Jinx runs away from Simon, suddenly finding himself traveling with a boy and a girl his own age. The boy, Reven, knows nothing of the Urwald, and has to be protected from doing idiotic things like trying to spend the night off the path or cutting up living trees. Simon has been watching the girl, Elfwyn, from Simon’s magic window for years, and finds that she is not nearly as instantly sweet and understanding in real life as she was in his imagination. All three of them are under some sort of curse, and they head off to the Bonemaster, the most feared wizard in all of the Urwald, to see if he can reverse their curses, even though Simon told Jinx most particularly to stay away from the Bonemaster.

This is really just the perfect kind of book for me, full of characters that I like and want to know better, and magic that involves being able to hear trees talk (something I tried very hard to do as a child) and a setting that is both new and filled with familiar things. It is split up into two distinct sections, the first part with more internal conflicts as Jinx gets to know Simon and Sophie and tries to learn magic, and the second one, where he is engaged in a Daring Quest with Noble Companions. I enjoyed both parts, and I liked especially that the quest started not because of a big prophecy and Jinx being the chosen one, but because he got in a fight with Simon. And that fight was both about the particular magic of that world and also about something that comes up so often in our world, an adult keeping secrets from a child, thinking that said child isn’t yet ready to handle the truth. It all came together just beautifully. I’d say this is an excellent choice for fantasy-loving people of about ten and up, and recommend it very highly.

I won this book from Charlotte’s Library, and Sage Blackwood was kind enough to autograph the book and write me a separate notecard, so that I can keep her signature even if I decide that the book should move on, say, to my son’s underfunded school library. When I mentioned this possibility to my son, he said that we could pass it on after we’d read it “a dozen or a hundred times.” That’s my sweet booklover, even if reading is still an uphill struggle for him. And I did really love it, so I don’t think I’ll be passing it on just yet.

I'm a librarian and book worm who believes that children and adults deserve great books to read.
View all posts by Katy K. →
This entry was posted in Books and tagged 48 hour book challenge, youth fantasy. Bookmark the permalink.