This is one that I asked my library to buy so that I could read it, based mostly on Charlotte’s recommendation, and especially because it sounded like a good boy fantasy. 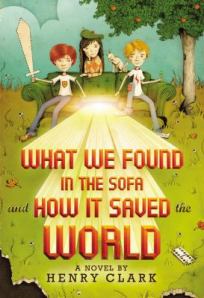 What We Found in the Sofa and How It Saved the World by Henry Clark. Little, Brown and Company, 2013.
River and Freak are always best friends; Fiona only talks with them while they all wait for the bus, before anyone else can see them. But the morning an old, claw-footed sofa appears next to their school bus stop, something is put in motion that brings them together in ways they never expected. We’re talking teamwork – this is middle grade fiction.

It feels like our time, our world, and not a particularly cheerful corner of it. All three of our kid protagonists have lost at least one family member, and their subdivision is nearly empty because it borders an underground burning coal seam, which leaks toxins into the air and sometimes sets nearby houses on fire. But this is just the backdrop, and in the foreground we have a talking, tessering sofa, frequent flash mobs featuring everyone around except River and Freak breaking out into numbers from classic musicals, and a rare zucchini-colored crayon.

The sofa turns out to be part of a computer named Guernica, more or less run by their eccentric neighbor, Alf, who turns out to be the only person trying to stop a total takeover of the earth by aliens from another dimension. These aliens usually look like humans, and have been working on their scheme to turn the residents of this small town into mindless factory workers for half a century, making processed food and giving away cell phones that let them control minds. Because they view kids as even less worth noticing than adults, the kids are a central part of Alf’s plan to defeat the Disin Corporation. But how far can they get, and is a rare World War II crayon really bait enough to lure a criminal mastermind into revealing himself?

This is really just about perfect fiction. The kid protagonists, mystery, humor, and lots of close escapes make for a story that will suck in even reluctant readers, while environmental themes and character growth give it some heft and depth. My son was definitely interested in it as I was reading it; my only quibble with it is that at 355, it’s a little long for him just yet. Still, I’d say he’s just on the lower edge of the age range for this book. More advanced readers and those in the middle or top side of the middle grade range should do just fine, and will love it.

What We Found in the Sofa and How It Saved the World was nominated for the Cybils award, and so counts for my Armchair Cybils reading.