Thank you for all the love on my first Top 10 List, and my apologies for my absence! I was feeling all caught up on reviews and proud of myself last weekend; I wrote my Top 10 list on Sunday and looked forward to polishing off a last few adult reviews this week before moving on to all Cybils reviews. Then my library got hit with a large storm and lost power for several days. All my notes are here, even if I come in early or stay late to write. I thought of writing reviews of books at home, but… I am trying hard to recover from a nasty bout of bronchitis. So on the days when I would have been at work, I took my kids to school and came back home and went to bed, with the net result that a lot less happened than usual. 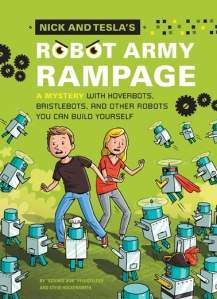 I read this book in e-galley downloaded from Edelweiss, and generously given to me by Quirk Books. While this book isn’t out until February (apologies for reviewing it so early!), the first book in the series, Nick and Tesla’s High-Voltage Danger Lab, came out this month.

Nick and Tesla are still living with their eccentric inventor uncle while their parents are off doing something in Uzbekistan in book two of this geeky mystery series. They haven’t heard anything from their parents in weeks, and Nick is increasingly disturbed and constantly checking the phone for new messages. Tesla, his twin sister, keeps finding things to try to distract him: building mini battle bots, for example, and trying to find out who stole the valuable comic from their friend Silas’s dad’s comic book shop. They also wonder about the new owner of their favorite hobby and robot supply store, the Wonder Hut, a very intelligent woman whom their uncle quickly develops a disgusting crush on. The kids are also inventors, and detailed instructions for their inventions are included every couple of chapters: mini battle bots, a hover bot, bugs with light-up eyes, a large water gun and more.

The mystery is perfectly serviceable, so that neither my son nor I figured it out until close to the end. If I were reading a book like this purely for myself, I would want more in the way of character development than Tesla being the one who rushes into danger and Nick being the more cautious one. However, I am not the target audience – this is very clearly targeted at middle grade geeks, into which category my son falls. He really loved this book. I’d been worried about being able to read a 200+ page book to him in the two-month review period, but we sped through it. The robot instructions are good, clearly illustrated, and note steps where adult assistance was required. They use parts that should be readily available either around the house or from hobby or hardware stores. All the aspects of the book put together – the excitement, kids saving the day, and the nod towards character development, and the fun DIY projects – made for a very fun book. We’re definitely looking forward to reading more of this series.

I'm a librarian and book worm who believes that children and adults deserve great books to read.
View all posts by Katy K. →
This entry was posted in Books and tagged DIY, geekiness, Quirk Books, robots, youth mystery. Bookmark the permalink.