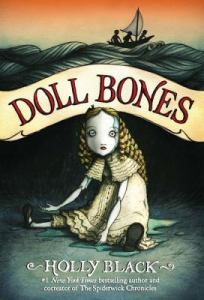 Doll Bones by Holly Black. Illustrations by Eliza Wheeler. Margaret K. McElderry Books, 2013
Zach, Poppy and Alice are twelve, just at that awkward age when children begin to turn into teens. They are still getting together to stage elaborate adventures with dolls and action figures, even though they hide it from others. When Zach’s father throws away the action figures, he’s too conflicted by everything to tell Poppy and Alice the truth, instead telling them he’s too old to play. So when Poppy wakes them in the middle of the night with a story about the creepy doll – the Queen – in her mother’s china cabinet being full of human ashes that want to be properly buried, neither of the other two know whether she’s telling the truth or making a desperate bid to keep the triumvirate together. All of them have family problems that play into their relationships with each other – Zach’s overly-harsh and only recently present father, Poppy’s neglectful family, and Alice’s overprotective grandmother. Despite not fully believing, and knowing they will all be in terrible trouble, the three set out on a journey across state lines to find a resting place for the Queen’s ashes.

Honestly, my first thought with all of this (as the wife of a gamer) is that somebody needs to teach these kids a nice role-playing game system. I hear Fate is popular these days, and I know a lot of libraries run ongoing rpgs for this age group. That being said, this really isn’t the point of the book. I’d describe it as a coming-of-age story with touches of creepy magical realism. I found it lovely as that – so nice to see the kids figuring out how they can be friends and interact as some things are changing and some are staying the same. But I’m glad I was warned in advance that it wasn’t a straight-up fantasy; magic is much more in the fore in Black’s other books, and I could easily have been disappointed. This is one that I think will do well with kids who don’t normally read fantasy, but like a little spooky, maybe more than hardcore fantasy readers. This was nominated for the Cybils, but didn’t make the shortlist. It won a much more widely recognized Newbery Honor award, which seems a better fit. It’s happy to see an author I’ve loved getting big acclaim like this. I very much enjoyed it while at the same time feeling that it needs the right reader in the right mood for this mix of adventure and introspection with a little ghostiness.

I'm a librarian and book worm who believes that children and adults deserve great books to read.
View all posts by Katy K. →
This entry was posted in Books and tagged Armchair Cybils, award winners, Newbery, youth fantasy. Bookmark the permalink.