Hooray for multicultural children’s books! I checked out several in preparation for Multicultural Children’s Book Day, and put more on my list from books that I found out about then. Here are three of our favorite recently found multicultural picture books. Also, it’s Kid Lit Blog Hop day – click on through and see what other great things my fellow kid lit bloggers have put together! 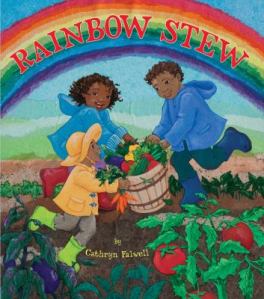 Rainbow Stew by Cathryn Falwell. Lee & Low, 2013.
Fun, rhyming text and bright painted illustrations show siblings of African descent brightening a rainy day by picking vegetables of all colors in the garden and then making them into stew for lunch. A framed graduation photo in the living room and scenes of everyone curling up with books while the stew simmers make it clear that this is a family that values education. Growing your own veggies is really popular these days, and this book will appeal to those families with a story told in words simple enough for older toddlers and up. This one was recommended by Mia at Pragmatic Mom. I found my four-year-old going back to over and over on her own. 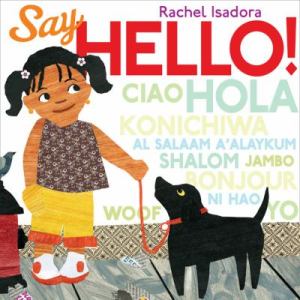 Say Hello! by Rachel Isadora. G.P. Putnam’s Sons, 2010.
In another book good for quite young children, Carmelita, her mother, and her dog walk through their multicultural neighborhood on their way to Abuelita’s house. They stop to say hello to their friends in the appropriate language (pronunciation guide included). The puppy always knows just what to say in every language: “Woof!” The cut-paper collaged illustrations perfectly illuminate the beauty of variety. (Even though this is the only one of the three with no food on the cover, there’s plenty on the inside, as they pass lots of ethnic food shops and go on to eat at Abuelita’s house.) My colleague Ms. J. used this as the focus book for a storytime series called “Multicultural Me” and it was also a hit with my preschooler. 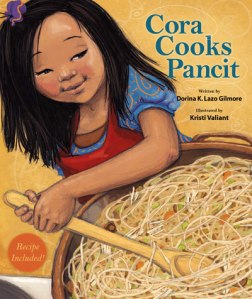 Cora Cooks Pancit by Dorina K. Lazo Gilmore. Illustrated by Kristi Valiant. Shen’s Books, 2009. 2/25/14
For a preschooler/early elementary audience rather than toddlers, Cora Cooks Pancit tells the story of a Filipina-American girl, the youngest of a large family, who’s finally allowed to provide real help cooking a traditional Filipino meal for her family. We watch as she’s first left out by her older siblings, then her delight when she’s told she can help, followed by an array of delicious food dancing through her head as she decides what to cook. Finally, she and her mother go step-by-step through cooking this traditional noodle dish and sharing stories of Cora’s grandfather, whose recipe they’re using. Though it feels like it’s meant specifically for Filipino children (and I really don’t see many aimed at this audience!), this is also a celebration of growing up enough to contribute to the family, a sentiment that children of any ancestry can relate to.

I'm a librarian and book worm who believes that children and adults deserve great books to read.
View all posts by Katy K. →
This entry was posted in Books and tagged cooking, multiculturalism, picture books. Bookmark the permalink.