I don’t read very much contemporary realistic fiction, but when Brandy posted about a middle grade book with a Filipina protagonist a while back, I actually exclaimed out loud and went to track it down right away. This turns out to be another older middle grade book that we keep in the teen section at my library. 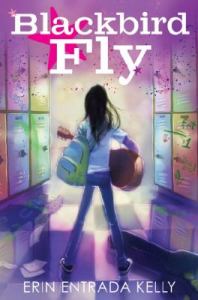 Blackbird Fly by Erin Entrada Kelly. Greenwillow Books, 2015.
Analyn – who goes by Apple – is the only Filipina at her middle school in a very white Southern town. She lives with her widowed mother, who’s so focused on Apple’s future college success that she forbids all extracurricular activities, especially music, and also tries to live as cheaply as possible to have more money to send back to the Phillipines. Naturally, Apple loves music and wants to play Beatles music on the guitar more than anything. Apple had at least had friends, but now that they are starting middle school, her friends Alyssa and Gretchen have decided that popularity is the most important thing. The popular boys maintain lists of the prettiest and ugliest girls in school, and Alyssa especially thinks that Apple, with her disregard for fashion, is likely to end up on the infamous Dog Log, while Alyssa herself is aiming for a spot on the pretty list.

So things start off badly and get worse before they start getting better. Getting better is helped meeting a new cute boy, Evan, who’s moved from California where his best friend was Filipino, so that the home cooking that Apple is embarrassed by tastes like home to him. Evan and the cool music teacher, Mr. Z., encourage Apple to pursue her dreams of guitar playing, and Evan and Apple eventually make friends with Heleena, a social outcast because she is overweight. Apple undergoes a very satisfying transformation from trying too hard to fit in to standing up for the various parts of her identity with her mother and at school, even being able to stand up for others who are being thrown under the popularity bus. Apple learns guitar with unrealistic speed, but her love for music comes through as genuine and I was willing to forgive the prowess in the context of the story.

Unfortunately, I didn’t love this book as much as I wanted to, and I am still trying to figure out why. Some time ago I read an article – I wish I could remember where – bemoaning that when book children have their lives changed for the better by a teacher, it’s nearly always a male teacher, even though most teachers are women. That’s something that I’m sure seems an individual choice to each author, but when repeated over dozens of books, adds up to a message that female teachers are just less competent. That complaint has stuck in my mind, and having Apple’s transformation happen through both a male teacher and male friend after her female friends have abandoned her sends a really unpleasant message. I found the beginning parts, where Apple is treated quite cruelly by her friends, to be really painful to read – is it because it seemed even more painful than my own painful middle school experience or because I don’t want to think of my own part-Filipino kids going through similar? And my love and I had a hard time believing that a Filipina parent would be so very restrictive and down on music as Apple’s mother was – didn’t she know that kids need extracurricular activities as well as good grades to get into college?

Still, Apple and Evan were very likeable, and the two faithless friends at least believable. I was drawn into the story even as it upset me in places. And when I had a young bibliovore visiting, she had already read and enjoyed this book enough that she sat down and re-read the last third of the book. So I’d still recommend it to readers of realistic middle grade fiction, particularly those looking for books about socially awkward girls finding their way in middle school.

I'm a librarian and book worm who believes that children and adults deserve great books to read.
View all posts by Katy K. →
This entry was posted in Books and tagged diversity, Filipino, youth fiction. Bookmark the permalink.