Though Cybils season is over, it took me long past the announcement of the winner to get my hands on all of the picture book finalists. Since they were all really good books, I’ll tell you about them anyway.

The Bear’s Song by Benjamin Chaud. Chronicle Kids, 2013.
From a library standpoint, this book is unfortunately annoying – its extra-tall size means that it won’t fit upright on shelves and might not get found, especially once it’s no longer on the new book shelf. The basic story is that little bear has run away, and papa bear is chasing him all through a large French city, ending at the opera house. The crowded pen drawings show lots of details, with humor for both kids and adults. It’s a puzzle to see who can find little bear hiding in the picture first – in some, we never did. The midnight blue cover didn’t attract my daughter initially, and we had it for a couple of weeks before she’d let me read it to her. Once we’d read it, though, she loved it, and asked for it repeatedly. 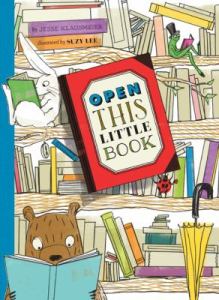 Open This Little Book by Jesse Klausmeier. Illustrated by Suzy Lee. Chronicle Books, 2013.
This is a nested story, short on words and high on charm. Pages cut to look like little books of ever-decreasing size tell the story of creatures of ever-increasing size opening their books, all forming a nice rectangular rainbow once opened. Both the four- and the nine-year-old succumbed to the charm, and the idea is simple enough that my daughter could and did go through it on her own over and over again. 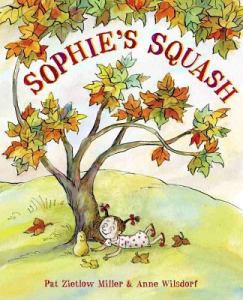 Sophie’s Squash by Pat Zietlow Miller. Illustrated by Anne Wilsdorf. Schwartz and Wade Books, 2013.
Sophie falls in love with the butternut squash her family brings home from the farmer’s market. Bernice is just the right size to hold and love, and her mother kindly decides to call for pizza when she discovers that dinner has developed a personality. But what to do when Bernice develops spots and starts to get squishy? This is a traditional story, rather than a concept book like the previous two, delightfully told with both heart and humor. I especially loved Wilsdorf’s characters with their large noses and unruly hair, so much friendlier and more human than the polished digitally-made illustrations that are popular these days. 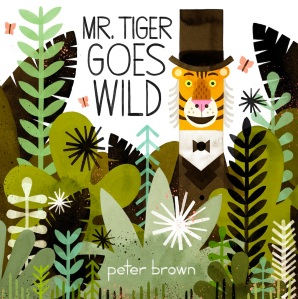 Mr. Tiger Goes Wild by Peter Brown. Little, Brown, 2013.
It’s a drab city landscape filled with animals walking upright and wearing formal 1910s clothing, all shown in grays and browns. Only Mr. Tiger is bright orange, and he is tired of wearing his stiff clothes and carrying on stiff conversations about nothing in particular with the other animals. Mr. Tiger decides that he needs to let loose a little – and then a lot. Over the course of the book, he – and eventually his friends – find a balance between wild and cultured. The message is a good one, and the build-up of all the animals in their formal attire makes the switch to otherwise unremarkably nude animals hilariously shocking. The pictures may not be as detailed as those in The Bear’s Song, but they convey an amazing amount of personality. It’s short enough for preschoolers, and funny enough for all ages.

I'm a librarian and book worm who believes that children and adults deserve great books to read.
View all posts by Katy K. →
This entry was posted in Books and tagged Armchair Cybils, Cybils, picture books. Bookmark the permalink.