Have I mentioned before that Sarah Zettel is a favorite of mine? Bad Luck Girl, the final book in her American Fairy trilogy (after Dust Girl and Golden Girl)is coming out at the end of this month!!! I pre-ordered it today, along with Varian Johnson’s The Great Greene Heist, which is coming out the same day.

My love got this one for me for my birthday a while back, where it sadly went unread for a while because I owned it and had a large pile of library books. 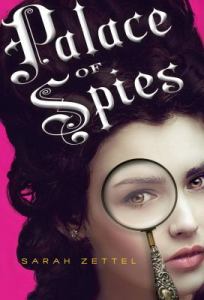 Palace of Spies by Sarah Zettel. Houghton Mifflin Harcourt, 2013.
This is the first Zettel book I’ve read that doesn’t have a sci-fi or fantasy element, though I’d hesitate to call it serious historical fiction. There’s some depth – I’d hardly expect less from Zettel – but for the most part, this is a madcap spy adventure.

Margaret Preston Fitzroy, aka Peggy, lives with her cold Uncle Pierpont and her beloved cousin Olivia. When her uncle betroths Peggy to a rich and handsome but abusive gentleman, Peggy rebels – only to find herself cast out into the street without even her pocket money. In desperation, she turns to a brand-new acquaintance, Mr. Tinderflint, who claims to have known her mother. He seems to be a foolish aging dandy, but offers her a position as a spy in the royal court. After some rigorous training with a pair of unpleasant people – card playing from Mr. Peele, clothing and etiquette with Mrs. Abbott – Peggy is sent to court pretending to be the recently deceased (at home, away from court) Lady Francesca Wallingham, a young lady-in-waiting to the Princess in the court of George I.

Here the plot both gets more exciting and more implausible. Really – the other ladies in waiting, the Princess, and even Lady Francesca’s secret lover are all supposed to believe that Peggy is Francesca, just because she has roughly the same build and coloring and the fashion involves heavy make-up? I had to just set this aside for the rest of the story to work. The list of things Peggy should know and doesn’t keeps growing, as she tries to figure out what side her spymasters might be on, what secrets Francesca herself was hiding – and if she actually died of natural. The plots are tangled; the fashion and gossip are epic; there is a pleasurable bit of romance. As always, Zettel pays meticulous attention to historical details, educating the reader about the times along with Peggy.

There are some intense moments in what’s otherwise a light, enjoyable read – an attempted rape near the beginning, Peggy witnessing a couple having sex (I wondered at the people in question for their choice of locale), and some named characters dying violently.

Honestly, I am so in love with Callie and her story that it’s hard for me to be as fond of this book – and perhaps it’s not surprising, fantasy fan that I am, that I prefer Zettel’s fantasy books. But – this is still an awfully fun book, more in the vein of the Gallagher Girls series than your typical serene and serious historical.

I'm a librarian and book worm who believes that children and adults deserve great books to read.
View all posts by Katy K. →
This entry was posted in Books and tagged historical fiction, sarah zettel, spies, teen fiction. Bookmark the permalink.

2 Responses to Palace of Spies