The Maze of Bones

As we were once again stuck waiting for the next book in our series to be returned, I took our teen librarian’s advice on an audiobook for my son and I to listen to. 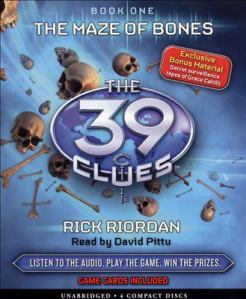 The Maze of Bones. The 39 Clues Book 1. by Rick Riordan. Read by David Pittu. Scholastic Audio, 2008
So, the 39 Clues. I’d heard of it. A Great Big Long Series! With four spin-off series! Each book by a different Famous Children’s Author! Exciting action! Tie-ins! A web site with games! The chance to win real money yourself!!! Honestly, it all seemed like too much hype – with so much activity surrounding the books, would the story itself be any good? The whole series never really registered as one to bother reading.

But there I was, in desperate need of an audio book right then, and I gave it a try. Maybe it would work for my son even if it didn’t work for me. Here are the basics of the plot:
Amy and Dan Cahill, aged 12 and 11, are orphaned and impoverished members of a large, rich family. Their beloved grandmother, Grace, whom they spent every weekend with, has just died. Her will gives every member of the family a choice: either take a million dollars right then, or take the first clue in a series for a chance to win fame and an even bigger fortune. The four branches of the Cahill family have members on every continent, and their deceased members include just about every famous person ever. That means the search will involve learning more about famous people and places in Cahill history, starting here with Benjamin Franklin in Philadelphia and Paris. Amy and Dan, deciding that Grandma Grace was counting on them to solve the mystery for even more mysterious reasons, embark on the quest, with the help of their conveniently multilingual au pair, Nellie. There is danger to be avoided at every turn as our heroes must use their wits both to solve the clues and to stay away from the ruthless cousins also on the hunt.

As might have been predicted, the boy very much enjoyed the book. He’s a big fan of Rick Riordan and (unlike me) of high-action plot, and also very interested in history, so even though there wasn’t the fantasy element that’s usually his favorite, he was a happy camper. We looked up pictures of several of the places mentioned in the book to Amy and Dan are Neutral Characters in the age and ethnicity game, but the rest of the family included people of many different countries and skin colors, which the narrator did a fine job of reflecting. Nellie is the only person possibly of color who didn’t betray or try to trap the kids in the first book – I’m going to hope that’s more because everyone but Nellie is out to get our guys than anything else. The black-and-white nature of the characterizations was my least favorite part of the book, but didn’t bother the boy.

With a series like this written by so many authors, it’s hard to know what kind of consistency they’re able to maintain across the books. They do seem to vary widely in length, with book three only 156 pages and some of the later ones on the shelf looking decidedly fat. I’m hoping that since the earlier ones at least are mostly under 200 pages, they’ll be short enough for the boy to feel up to reading them to himself, now that he’s already liked the first one. In any case, if you’re looking for fast-paced bibliocrack for middle grade readers with some underlying educational value, this series is one to try.

I'm a librarian and book worm who believes that children and adults deserve great books to read.
View all posts by Katy K. →
This entry was posted in Books and tagged youth audiobooks, youth fiction, youth mystery. Bookmark the permalink.

1 Response to The Maze of Bones