The Castle Behind Thorns

I really enjoyed both of Merrie Haskell’s previous books, The Princess Curse and Handbook for Dragon Slayers, so when her latest book popped up as an available e-ARC on Edelweiss, I jumped at the chance to read it. It was officially published May 27 – the same day as Sarah Zettel’s Bad Luck Girl and Varian Johnson’s The Great Greene Heist, both of which I have at home waiting to be read. 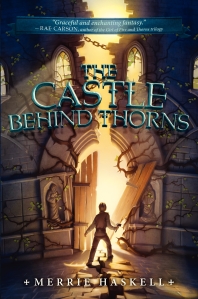 The Castle Behind Thorns by Merrie Haskell. HarperCollins Children’s, 2014.
Sand wakes up in the fireplace of the sundered castle, with no idea how he got there. It’s been 25 years since it and everything in it was split in two. Everyone fled, and a hedge of thorns sprung up around it. Now Sand is stuck inside the viscous, poisonous thorns, with no way to get out. The peculiar magic that broke everything also stopped all life in the castle – which means that while there’s nothing fresh, the remains of the castle’s food supplies are desiccated but not rotten. His first challenge is to survive – to find food and water, and to mend enough of the broken things in the castle to keep going. Fortunately, he’s a blacksmith’s son, with a good grounding in practical skills. Then Perrotte wakes up – the young Lady of the castle whom Sand found lying very dead in the crypt. At first their relationship is very rocky. Perrotte knows that she’s nobility, and expects to be treated that way, while Sand feels that as he’s the only one caring for the castle, he’s not going to take orders from anyone. But as Perrotte comes to accept her new reality, she also finds painful memories rising to the surface – memories that suggest that her death wasn’t a natural one.

Even though most of the book deals with just these two characters, it doesn’t feel empty. Both Sand and Perrotte are richly developed, very much affected by their relationships with the families that are no longer present. Sand is haunted by the arguments with his father, who wanted his only son to go to university rather than follow his footsteps as a blacksmith, while Perrotte had endless conflicts with her stepmother, who did everything she could to stifle Perrotte’s love of learning. We learn lots, too, about the medieval world this is set in – Sand’s blacksmithing, Perrotte’s astronomy, the state of handcrafting and scholarship in general, and the struggles of the duchy to remain independent from France. The local saints also play a major role – here, clearly still fallible humans rather than the diminished gods of Robin LaFevers’ His Fair Assassin series. Ultimately, this is a story of forgiveness – not excusing the horrible things that people can do, but looking at the importance of letting anger go to be able to live life freely. This was one that I had a hard time putting down and was so sad when it was done.

I might have mentioned that I love fairy tale re-tellings. Now that I think about it, Sleeping Beauty is an especially difficult one. It takes a lot of creativity to get around your protagonist being asleep for a hundred years or so, which means that every Sleeping Beauty novel I’ve read has been very different from all of the others. Here are ones I’ve read, and though I found some more I haven’t, I’d love to hear if you have favorites.

I'm a librarian and book worm who believes that children and adults deserve great books to read.
View all posts by Katy K. →
This entry was posted in Books and tagged fairy tales, Merrie Haskell, youth fantasy. Bookmark the permalink.

2 Responses to The Castle Behind Thorns