Rose and the Lost Princess

I really enjoyed reading Rose, one of the Cybils finalists this year, and I was so happy when I won this copy of the sequel from Liviana at . 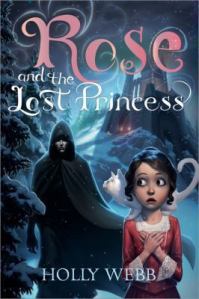 Rose and the Lost Princess by Holly Webb. Sourcebooks Jabberwocky, 2014.
When Rose was taken on as an apprentice to Mr. Fountain, the king’s chief magician, while keeping her useful and practical job as one of his housemaids, it seemed like the perfect solution. She’d thought, too, that having caught a wicked magician by magic would have made people in general more comfortable around magic. But the reality turns out to be much different. She’s exhausted from trying to do two jobs at once, and overall feelings towards magicians are downright hostile – even from her former friends on Mr. Fountain’s staff. When snow comes and stays in October, she feels sure there must be a magical cause, but not even Mr. Fountain can figure out how anyone could make it happen. Then Princess Jane, beloved of the military despite her three older sisters, is threatened. Rose is assigned to be her undercover guard in the palace – but will even that be enough? Rose will have to get a lot more comfortable with her powers very quickly to stop the kingdom from falling into complete chaos!!!!

Often magic feels the very opposite of practical and down-to-earth, which is maybe partly why Rose, who is all three of those things, is such a delightful character. Rose works to make friends on all levels of society, while disrupting devious and dastardly plots. The kingdom feels very British, but the enemy is the nearby kingdom of Talish, which I found a little distracting – is it alternate history or a completely new fantasy world? Even though the cover is pink and swirly, I’m sure my own boy at least would find this to be action-focused enough to make an enjoyable book, while girls and adult fans of children’s fantasy will eat it up with no difficulty at all. This continues to be a delightful series, and I’m very much looking forward to Rose and the Magician’s Mask coming out in September.

I'm a librarian and book worm who believes that children and adults deserve great books to read.
View all posts by Katy K. →
This entry was posted in Books and tagged youth fantasy. Bookmark the permalink.

2 Responses to Rose and the Lost Princess