Today is release day for Blue Lily, Lily Blue. I haven’t read it yet. I know, I could have gotten my hands on a review copy, but I am in love with the audio editions of these books, so I have to wait. On the plus side, I haven’t found any of my Cybils books for download from the library, which means I can listen to this guilt-free while doing my chores at home. So instead of the new-new Maggie Stiefvater, I offer you a review of Sinner, which came out this summer. 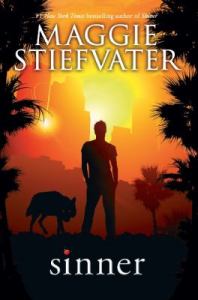 Sinner by Maggie Stiefvater. Read by Dan Bittner and Emma Galvin. Scholastic Audio, 2014.
Isabel Culpepper’s once-perfect life has fallen apart, and leaving Mercy Falls didn’t fix things. Her brother is still dead, her parents are separated (not that she wants her father around), she has no friends in Los Angeles. She gets through life by working on not giving a damn about everything, and showing it to the world. She’s no longer in love with Cole St. Clair – life is safer that way, and he’s not around anyway.

And then he comes, making his way to Los Angeles by signing a deal to produce an album on a reality show. The reality show is run by one Baby North, who’s made a reputation for herself by filming stars crashing and burning. He’s determined not to get sucked back into drugs, not to crash on TV – but the wolf is still in his blood, calling him, and Isabel Culpepper is less than thrilled to see her one-time maybe boyfriend show up with a camera crew.

So there are werewolves, and lots and lots of angst. It works, though, because the angst is legitimate. Cole isn’t a safe person, and while both he and Isabel and we the reader know it, we also know that he’s trying, and that he and Isabel both help each other be better people. It’s dark rock-and-roll romance, sexy and dangerous (without being explicit.) There’s also lots going on with the side characters and Isabel and Cole’s work, so that the romance is just part of the characters’ total development, as it should be. Both of the readers sound just right – Bittner with his rough but young-sounding voice and Galvin reading like the ice queen Isabel is. I was seduced by the characters all over again.

I'm a librarian and book worm who believes that children and adults deserve great books to read.
View all posts by Katy K. →
This entry was posted in Books and tagged paranormal romance, teen fantasy, werewolves. Bookmark the permalink.