I’m reviewing this one separately from the other Caldecott winners (see Caldecotts Part 1 and Part 2) because it’s neither a picture book nor appropriate for younger teens. I had been looking forward to reading it for a very long time, and featured it on the Asian-American Graphic Novels list I posted last year. 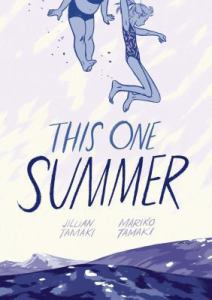 This One Summer by Mariko and Jillian Tamaki.  First Second, 2014.
Rose has been going to the same cabin on a lake every summer for as long as she remembers.  Windy, a year and a half younger, has been her summer friend that whole time, too.  This year, Windy in particular is looking forward to puberty.  Rose is less interested in how her body might change than in the cute convenience store clerk, a much older teen.  Her mother is depressed and her parents struggling to get along as they have tried and failed to have another baby, something that Rose isn’t really sympathetic towards.  In between swimming in the lake, starlight hot dog roasts, and late-night horror movie sessions with Windy, Rose and Windy piece together the story of the rocky relationship between the aforementioned cute clerk and his girlfriend.

This book got a lot of buzz when it first came out last summer, and I’ll just be kind to myself and say that I waited for the demand at the library to die down before reading it myself.  I was really excited to see it winning so many awards, including Caldecott and Prinz honors and lots and lots of best graphic novel and books for teens list. There’s diversity from the authors, and from Windy being adopted, though it’s unclear if she’s meant to be explicitly Asian.

Now that I’ve read the book, my feelings are mixed.  There are lots of good things about it – the casual friendships, the painful secrets, and the depiction of lazy summer days.  The art is absolutely breathtaking, from scenes of Rose swimming underwater to energetic panels of Windy krunking, to the girls swinging.  Everything is colored in peaceful shades of blue-gray.

On the other hand, I really didn’t like Rose. Even though I knew Rose was going through a hard time with her family’s stress and was clearly ignorant about a lot of things, it was really hard to sympathize with her when she did said yet another condescending thing to Windy and got verbally angry with her mother for being depressed.  Worst of all was the slut shaming – Rose frequently calls the convenience store clerk’s girlfriend a slut many times, and believes that it’s the girl’s responsibility to “protect herself” and keep things from going too far.  While an adult calls her on using the word “slut”, they don’t discuss it past that with her.  The clerk himself treats his girlfriend horribly.  We see Rose thinking about things, but the format doesn’t let us see into her head.  It’s never clear if she or the clerk ever revise their attitudes, ones that I considered horribly sexist even as a very conservative teenager myself.  I got the impression that the authors meant for her to be changing her mind on this, but if it was confusing to me as an adult, it would be even more confusing to a younger teen reading it. The older teens plot line was a huge part of the book, so this rather spoiled the story for me.

I could hope that being confronted with these ideas will make teens think about them, even if Rose doesn’t change her mind.  In any case, the peaceful summer cycles are just what they should be, and the art is breathtaking.

I'm a librarian and book worm who believes that children and adults deserve great books to read.
View all posts by Katy K. →
This entry was posted in Books and tagged award winners, diversity, teen graphic novels. Bookmark the permalink.

2 Responses to This One Summer